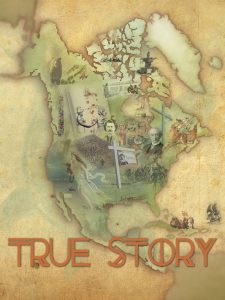 TORONTO, September 14, 2022 – This fall, The HISTORY® Channel debuts a new Canadian original documentary that explores the real, and often misrepresented, history of Indigenous peoples on the land that is now Canada. In honour of National Day for Truth and Reconciliation, True Story examines how to move forward from Canada’s colonial history and achieve reconciliation by first learning, then facing, the past. The two-hour documentary, premiering Friday, September 30 at 9 p.m. ET/PT, is narrated by Kaniehtiio Horn (Rutherford Falls) and helmed by the award-winning production team from Eagle Vision, including Executive Producer Lisa Meeches C.M., O.M. and Executive Producer, Creator, Director and Showrunner Dinae Robinson.

“The HISTORY® Channel is proud to provide a platform to share this important narrative more broadly,” said Lisa Godfrey, Senior Vice President of Original Content and Corus Studios. “Through the medium of television, a documentary as researched and engaging as True Story can contribute to moving the conversation around reconciliation and historical education forward.”

True Story takes an in-depth look at the relationship between Indigenous people, the land, and the settlers. Including Turtle Island’s (North America) creation story and the settler people’s theories that challenge it, the unique tools Indigenous people use to record their history, and the powerful role of women, Elders, and Two-Spirited/Indigiqueer in Indigenous society that patriarchal and Euro-Christian concepts sought to destabilize – True Story investigates how Indigenous history has been hidden and rewritten.

“In order for true reconciliation to take place we must acknowledge and learn from our shared past no matter how ugly it may be,” said Dinae Robinson. “True Story invites all Canadians to join an honest and entertaining conversation that looks at Canada’s history from the people who were here first,” said Lisa Meeches.

With accessible narration, engaging trivia, and informed Indigenous voices from across the country, True Story uniquely explores history from an Indigenous point of view. The journey is heartbreaking, astonishing and shameful, but it is also uplifting and inspiring.

The HISTORY Channel is a Corus Entertainment Network.