Praised by Variety as “a drama that will hook those who seek from their viewing a charge of adrenaline,” Season 1 of Departure is available to watch now with STACKTV and the Global TV App. 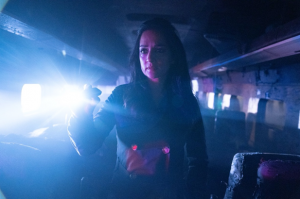 TORONTO, June 16, 2022 – All aboard! Global is set to launch Season 2 of event thriller Departure on Wednesday, July 13 at 9 p.m. ET, with an encore presentation Friday, July 15 at 8 p.m. ET on Global and Monday, July 18 at 9 p.m. ET on Showcase. Departure stars Emmy Award® winner Archie Panjabi and the late Academy Award® winner Christopher Plummer, in his last onscreen role. The intense conspiracy series follows the ensuing investigation into a mysterious crash of a controversial new high-speed train travelling between Toronto and Chicago. Back for an action-packed all-new six-episode season, Departure was a Top 20 hit with total viewers and the #1 Canadian series across all key demos when it premiered in 2020.

“Departure is a proven hit with international audiences, and we are thrilled it is back this summer to take Canadians on an all-new adventure like no other,” said Lisa Godfrey, Senior Vice President of Original Content and Corus Studios. “Archie Panjabi returns as expert investigator Kendra Malley, and while it will be bittersweet for audiences to bid farewell to the late Christopher Plummer, we look forward to celebrating the internationally-renowned Canadian acting legend in his final television performance as Malley’s mentor Howard Lawson.”

Departure Season 2 is a six-part event series that follows the investigation into the derailment of high-speed train The Apollo. Brilliant investigator, Kendra Malley (Archie Panjabi), heads to the U.S. to find the cause of the devastation in rural Michigan. With the eyes of the entire world on her, Kendra and her team unravel a series of interconnected threads, which lead to a number of mysterious motives. Was it the tech mogul inventor of the train’s automation software? Was it a mysterious member of a Mexican drug cartel? Was it a disgruntled employee resisting new technology? Working in conjunction with the FBI, Kendra must race to uncover the truth behind the crash and help to heal the damage caused by the terrible tragedy.

Shaftesbury is an award-winning creator and producer of original content for television, film, and digital, established in 1987 by Christina Jennings, Chairman and President. Shaftesbury’s current primetime slate includes 16 seasons of the international hit series Murdoch Mysteries for CBC, ITV Studios and UKTV, and five seasons of Hudson & Rex for Citytv, both are available in over 120 countries worldwide. Other projects include: the acclaimed horror anthology series Slasher on Shudder and Hollywood Suite, with Emmy® Award-winner Eric McCormack starring in the upcoming fifth season; three seasons of the acclaimed event series Departure for Global starring Emmy® Award-winner Archie Panjabi and the late Academy® Award-winner Christopher Plummer; and SisterS, a new Irish-Canadian co-production by and starring Sarah Goldberg (Barry) and Susan Stanley, for Crave, RTÉ and IFC. For more information, go to shaftesbury.ca.

Starlings Television is a division of Starlings Entertainment, a global group of companies that develops and produces award-winning film and television. Starlings’ expanding TV slate includes the award-winning drama series Departure, now in post-production for its third season. The first two seasons had a successful launch on Peacock in the U.S. and strong sales worldwide.