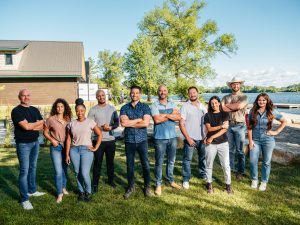 TORONTO, January 23, 2023 – Two of HGTV Canada’s biggest stars, Scott McGillivray and Bryan Baeumler, reunite in Renovation Resort (7×60), a one-of-a-kind vacation rental renovation competition series premiering Sunday, March 5 at 10 p.m. ET/PT on HGTV Canada and STACKTV. In this brand-new series distributed by Corus Studios, Scott’s recently purchased lakeside vacation resort needs a complete overhaul, so he enlists friendly rival and expert builder Bryan to help get his rundown property into shape. To transform the resort into a modern-day vacation destination, they bring in four professional designer-contractor duos who are up for the challenge. Each week, the pairs battle against each other in a riveting renovation showdown to impress Scott, Bryan, and the expert guest judges. In the end, the team with the best cabin wins the title of Renovation Resort Champions and a reward of $100,000.

At the start of the competition, the duos are assigned to one of four identical cabins that will be entirely renovated over the course of seven weeks. In each episode, they are tasked with remodeling a new space in the cabin, bringing their skills to transform the interior and exterior of the cabins into stunning retreats ahead of the peak rental season. Armed with their signature banter and keen observations, Scott and Bryan will check in regularly to evaluate the teams’ work and guide them through each cabin challenge. Facing off in this unique competition is dynamic husband-and-wife duo Rotem and Troy from Toronto, Ont., entrepreneurs April and Arnold from Chicago, Ill., business partners Jena and Sean from Toronto, Ont., and partners in life and work, Savannah and Kyle, hailing from Phoenix, Ariz. To learn more about the professional duos, visit hgtv.ca.

Throughout the season, Scott and Bryan are joined by expert guest judges, including Debra Salmoni (designer, Scott’s Vacation House Rules), Heather Greenwood Davis (travel writer and lifestyle host), Sarah Keenleyside (designer, Backyard Builds), Christine Tizzard (cookbook author and food stylist), Natalie Preddie (travel expert and writer), and Carson Arthur (landscape designer and television personality). Alongside Scott and Bryan, the judges will evaluate the renovations by assessing the quality, creativity, and functionality to determine the winning vacation cabin. In the first episode, the competitors’ mission is to tackle the primary bedroom and main-floor bathroom in one week. As these super-skilled teams work against the clock and under pressure, they will have to deliver exceptional designs if they want to be the best.

Renovation Resort welcomes series sponsor Tim Hortons, offering the competitors a well-deserved lunch of loaded wraps and bowls, plus an assortment of treats, coffee, and cold beverages throughout the season. In several episodes, SICO paint, available at RONA, highlights the brand’s line of Endurance and Prestige paint options to create inviting spaces. The curb appeal of the property is transformed with Techo-Bloc’s modern paving stones and landscaping products, allowing the competitors to extend their designs outside.