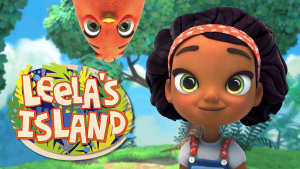 TORONTO, January 11, 2022 – Corus Entertainment’s Nelvana, a world-leading international producer, distributor, and licensor of children’s animated and live-action content, and TIME Studios Kids and Family, the recently announced kids and family programming division of the Emmy Award®-winning TIME Studios, have teamed up to develop the new original preschool series Leela’s Island. Marking the first development partnership between the two internationally renowned companies, and the first preschool content deal for TIME Studios, the animated comedy-adventure series features a curious five-year-old girl named Leela who discovers she has inherited a gift that allows her to transform into any animal she wishes and see the world through its eyes, in the process gaining a new point of view on her own kid problem.

“Leela’s Island is a show that will help kids learn to see the world from others’ perspectives. As one of the first Afro-Latina girls featured in an animated preschool series, Leela’s Island will go far in addressing the lack of representation in children’s content both in front and behind the camera,” said Maria Perez-Brown, Head of Kids and Family, TIME Studios. “We’re so excited to collaborate with Nelvana to bring this important preschool property to life.”

“We are incredibly passionate about Leela’s Island and believe Leela will become an icon for kids around the world,” said Athena Georgaklis, Head of Development, Nelvana. “The caliber of talent behind this project is unmatched, and is evident in the series’ perfect blend of heartwarming, magical moments and fierce, empowered storytelling. Working with the team at TIME has been a true highlight.”

About Nelvana
Entertaining kids for over 50 years, Nelvana is a world-leading international producer and distributor of children’s animated and live-action content. Nelvana produces a stable of award-winning and globally renowned brands that focus on comedies, preschool and action series, and ancillary consumer products programs. Nelvana’s content airs on Corus Entertainment’s kids channels in Canada and in over 180 countries around the world. The Nelvana library has over 4,800 episodes of programming and has received over 70 major international program awards including Emmys® and Canadian Screen Awards. Visit the Nelvana website at nelvana.com.

About TIME Studios
From one of the most globally iconic brands, TIME Studios is an Emmy Award®-winning television, film and immersive studio focusing on the development, production and distribution of truth-based premium unscripted and scripted storytelling that moves the world. With technical innovation and a brand defining visual language that dates back 98 years, TIME Studios aims to impact communities and the world at large with ideas that forge true progress. Combining the industry’s leading creators with TIME, one of the most trusted brands that reaches an audience of over 100 million people globally, TIME Studios is uniquely positioned to bring massive audiences to the world’s most impactful stories. Recent projects include, Black Gold (Paramount+), Big Vape (Netflix), John Lewis: Good Trouble (CNN Films), Amazing Grace (Neon), Right to Offend (A&E), Ricky Powell: The Individualist (Showtime), Mass Effect: The Story of YouTube, Kid of the Year (Nickelodeon/CBS), TIME100 (ABC) and the first scripted project for TIME Studios, Women of the Year (Amazon).