LINDSAY ELL AND PRIYANKA TO CO-HOST THE 2021 CCMA AWARDS PRESENTED BY TD STREAMING LIVE FROM LONDON, ON NOVEMBER 29

LINDSAY ELL AND PRIYANKA TO CO-HOST THE 2021 CCMA AWARDS PRESENTED BY TD STREAMING LIVE FROM LONDON, ON NOVEMBER 29

In a Streaming-First Event, Watch The 2021 CCMA Awards presented by TD Live at 8 p.m. ET / 5 p.m. PT Exclusively on the Global TV App and Prime Video

Watch an Encore Presentation on Global Dec. 3 at 9 p.m. ET/PT

Tickets to the 2021 CCMA Awards Presented by TD Available Now 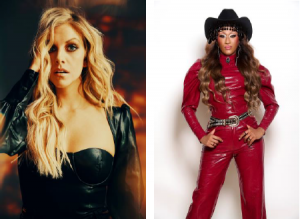 TORONTO, November 8, 2021 – Today, Corus Entertainment and the Canadian Country Music Association® (CCMA) are excited to announce that two-time CCMA Award winner Lindsay Ell and Canada’s Drag Race Season 1 winner Priyanka will co-host the 2021 CCMA Awards presented by TD. For the first time, this year’s awards will livestream exclusively on the Global TV App and at no additional cost for Prime members on Prime Video on Monday, November 29 at 8 p.m. ET / 5 p.m. PT and will be available to watch until 1 a.m. ET / 10 p.m. PT following the live presentation. In addition, country music fans can also listen to the award show live across Corus-owned radio stations Country 105 (Calgary), CISN (Edmonton) and Country 104 (London) on Monday, November 29 at 8 p.m. ET / 5 p.m. PT as well. Then, those who missed the live event can catch an encore presentation of the show Friday, December 3 at 9 p.m. ET/PT on Global or stream the show on demand with STACKTV and the Global TV App.

“The CCMA Awards are a core part of our live event content strategy here at Corus and we’re thrilled to announce that this year’s show will be delivered to viewers in a streaming-first format on even more platforms,” said Troy Reeb, Executive Vice President, Broadcast Networks, Corus Entertainment. “From our Global TV App to Corus Radio, Corus is bringing Canadians the best in country music on more platforms than ever before with two of Canada’s finest performers, Lindsay Ell and Priyanka, at the helm of it all.”

“We are thrilled to have Lindsay and Priyanka as our co-hosts this year,” said Amy Jeninga, President, CCMA. “Both have had a wildly successful year and are incredible performers. We can’t wait to see how they light up the Budweiser Gardens stage on November 29!”

“We are making history this year at the CCMA Awards,” said Priyanka. “Music has such a special place in my heart and so does hosting TV! Being able to put the two together is making my heart explode. Country music is so beautiful and I’m such a big fan. I can’t wait for Canada to see that I’m your country queen!”

“Ever since I was a little girl, I have dreamed about being a part of the CCMA’s in a big way. To be co-hosting this year with Priyanka is such an incredible honour and I am so proud to be a part of CCMA history because of it,” said Lindsay Ell. “As Priyanka has said to me many times, country music is so beautiful and we are both big fans. We cannot wait to step out onto the stage and celebrate this incredible year of country music.”

Lauded as “one of the most exciting and talented young artists in country music” (Forbes), Lindsay Ell is a triple threat: accomplished musician, unique vocalist and awe-inspiring songwriter. With two #1 singles under her belt in Canada, Lindsay earned the most 2021 CCMA Award nominations of any female –Female Artist of the Year, Interactive Artist or Group of the Year, Video of the Year and Songwriter(s) of the Year and the coveted Album of the Year.

What’s her name? Priyanka! After being crowned the first-ever winner of Canada’s Drag Race in 2020, Priyanka has become an international, mainstream drag sensation and cultural icon. She’s performed in sold out shows all across Canada and broke barriers as the first ever drag queen on the cover of Elle Canada. Priyanka’s EP “Taste Test” debuted at #5 on the iTunes music charts in Canada with 2 million streams on the musical endeavour. With a full length album, holiday single and country song on the way, the music industry better get ready to bow down to Queen Priyanka!

Tickets to the 2021 CCMA Awards presented by TD are available for purchase at budweisergardens.com. For each ticket sold, $1 will go directly to the CCMA Foundation, the charitable arm of the Canadian Country Music Association. Funds raised will be leveraged in support of The Unison Fund and MusiCounts.

Prime members will be able to live stream the 2021 CCMA Awards presented by TD on the Prime Video app for smart TVs, mobile devices, Fire TV, Fire TV stick, Fire tablets, Apple TV and stream online. Prime Video is available in Canada at no extra cost to a Prime membership for just CAD$ 79/year or CAD$ 7.99/month (plus applicable taxes), new customers can find out more at amazon.ca/prime and subscribe to a free 30-day trial.

Established in 1976, the CCMA is a membership-based, not-for-profit organization committed to the promotion and recognition of Canadian country music. Built upon the foundation to educate, elevate and celebrate Canadian talent, the CCMA progressively heralds the spirit, community and creativity that country music fosters through year-round initiatives, culminating every fall with Country Music Week and the Canadian Country Music Association Awards. Sponsors of Country Music Week and the 2021 CCMA Awards Show include FACTOR, Canada’s Private Radio Broadcasters and the Government of Canada through the Department of Canadian Heritage’s “Canada Music Fund”, Radio Starmaker and the Government of Ontario.