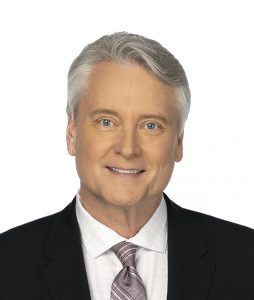 EDMONTON, April 13, 2022 – Global News Edmonton announced today that after 30 years with the station, beloved anchor Gord Steinke has decided to retire. Gord’s last broadcast will be in August.

A familiar presence to viewers for three decades, Gord is an award-winning journalist, singer-songwriter, bestselling author and one of the region’s most popular news leaders, co-anchoring Edmonton’s #1 newscast, Global News Hour at 6 and Global News at 5. Prior to his career in broadcasting, Gord was a touring base player in the 1970s for various bands before giving up the rock ‘n roll lifestyle to pursue journalism. He began his on-air career at CBC, then the ABC affiliate in Minneapolis before moving to ITV in Canada (now Global Edmonton) in 1992.

“It wasn’t an easy decision to leave such a great team at Global Edmonton,” says Gord Steinke. “After 30 years at the anchor desk, time has flown by. I have a lot of adventures on my bucket list that I am excited to explore and feel I better get moving while I can still get on my motorcycle. Thank you to the incredible viewers who have supported me for three decades.”

“Gord has been a leader in the newsroom and in the community for over three decades,” says Jim Haskins, Global Edmonton News Director/Station Manager. “He has seen it all and reported on it. We will greatly miss having Gord’s steady hand guiding us in the newsroom, but we wish him the best in his well-deserved retirement.”

A pillar of the community and considered a local legend, Gord devotes his time to several charities and is on the board of directors with the Kids With Cancer Society. He was awarded a RTDNA Canada Lifetime Achievement Award in 2016, appointed an Honourary Lieutenant Colonel of the 15 Edmonton Field Ambulance (part of the 41st Canadian Brigade Group), and received the distinguished Sovereign’s Medal for Volunteers from the Governor General of Canada, which recognizes exceptional volunteer work in the community.