The Legacy Continues with the Season 2 Premiere of Holmes + Holmes Starting October 7 at 10 p.m. ET/PT on HGTV Canada 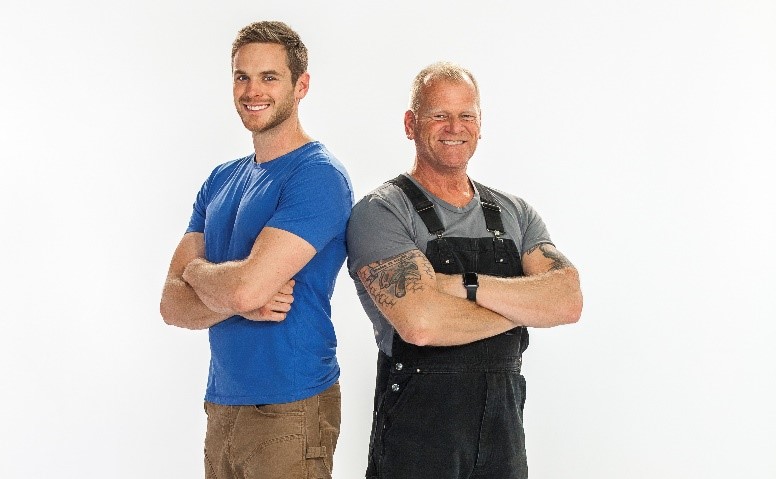 For Immediate Release
TORONTO, August 23, 2018 – Reaching more than 21 million Canadian viewers* and earning his place as one of Canada’s most trusted contractors, HGTV Canada celebrates 15 years of Mike Holmes programming with the return of Holmes + Holmes on Sunday, October 7 at 10 p.m. ET/PT. Ranked as a Top 20 Canadian entertainment specialty series in its first season,** Season 2 of Holmes + Holmes continues Mike’s construction journey with his son Mike Holmes Jr., as they venture into business together and take on their biggest challenge yet: buying, renovating, and selling three houses for profit.

“I’m so grateful that homeowners and viewers have welcomed me into their homes for over 15 years,” said Mike Holmes. “At a young age my dad always told me that if you’re going to do something, do it right the first time and I’m proud that HGTV Canada has helped me to spread that message to homeowners. I’m excited to Make it Right™ for the next 15 years with my son and family by my side.”

Since his first television series on HGTV Canada in 2003, Mike has led nine Canadian-original series and specials, including fan-favourite series Holmes on Homes, which had a seven season run, Best of Holmes on Homes, Holmes Inspection, Holmes Makes It Right, and Holmes + Holmes. He has also appeared in HGTV Canada’s Home To Win and Sarah Off The Grid, along with special events including Holmes In New Orleans, Mike Holmes Ultimate Garage, Lien On Me, and Holmes: Behind the Overalls. In every series, Mike lends his eye for detail and expert advice to guide homebuyers, homeowners, friends, and family into doing it right the first time.

“Mike Holmes has elevated the format and standards of home improvement programming,” said Lisa Godfrey, Vice President, Original Content, Corus Entertainment. “We are so proud of the dynamic original content we have collaborated on with Mike over the past 15 years and know that this momentum will continue to influence and inspire viewers across the country with Season 2.”

Mike’s commitment to building standards, the promotion of skilled trades, and his adamant belief in making it right has led him to build an iconic empire and achieve impressive accolades from the Gemini Viewer Choice Award for “Favourite TV Personality” to the Queen’s Jubilee Medal. In 2012, Forbes Magazine anointed Mike the third most “Trusted Celebrity” and he was named among the Top 5 “Most Trusted Canadians” by Readers Digest for five years running. Most recently, he was named “Best TV Personality” by the Toronto Sun Readers’ Choice Awards in 2017. Mike is also a best-selling author, continues to give advice at speaking engagements across North America, and gives back through his Make it Right foundation.

To celebrate the partnership milestone, HGTV Canada’s social and digital platforms will publish a variety of anniversary-themed content, including fun videos of Mike and Mike Jr. competing in skill testing 15- second and 15-minute challenges. Additional photo galleries and articles on everything from special family moments to Holmes’ approved renovation advice and tips will roll out in the coming weeks. Viewers can catch up on Holmes + Holmes Season 1 now on HGTV.ca. Season 2 will be available on HGTV.ca and On Demand with participating service providers after each episode airs.

In anticipation of the Holmes + Holmes Season 2 premiere, Mike Holmes and Mike Holmes Jr. will be available for interview opportunities upon request.