Stream Season 1 with STACKTV, the Global TV App and GlobalTV.com 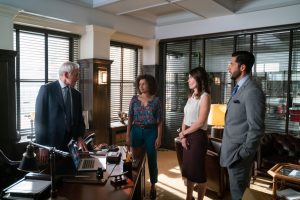 The cast of Family Law

TORONTO, May 17, 2022 – The verdict is in! Today, Global announced that Season 3 of hit Canadian legal drama Family Law has been greenlit for an all-new 10-episode season. Produced by SEVEN24 Films and Lark Productions, and created by Canadian award-winning author Susin Nielsen, Season 3 is set to begin filming in Vancouver on May 24. The principal cast including Jewel Staite, Victor Garber, Zach Smadu, Genelle Williams and Lauren Holly all return for the new season. This renewal comes ahead of the show’s Season 2 premiere, which will be announced at a later date.

“As the most-watched new Canadian series this past fall and with the recent acquisition by The CW in the U.S., we are thrilled that Abby and the Svensson family will keep entertaining audiences at home and abroad for seasons to come,” said Lisa Godfrey, Senior Vice President of Original Content and Corus Studios. “With this renewal today, we continue to build Corus’ commitment to creating original Canadian content and compelling storytelling that reflects the lives and interests of Canadians as well as audiences around the world.”

Family Law is a witty, heartfelt look at the trials and tribulations of an imperfect family. The one-hour legal drama follows Abigail ‘Abby’ Bianchi (Jewel Staite) as she navigates her new life with her family including Abby’s father Harry Svensson (Victor Garber), her half- brother Daniel Svensson (Zach Smadu), and half-sister Lucy Svensson (Genelle Williams). Season 3 will follow Abby and her dysfunctional family as they help other dysfunctional families – all while navigating their own personal dramas. Guest stars for the new season will be announced soon.

Lauded as “the unexpected drama worth bingeing right now,” viewers can catch up on Season 1 of Family Law with STACKTV and the Global TV App.

Established in 2010, Lark Productions is an award-winning television production company with a proven track record of producing exceptional programming in Canada for the global marketplace. Lark develops both scripted and unscripted content, often in collaboration with Universal International Studios, a division of the Universal Studio Group, through a first-look distribution deal.

In addition to Family Law, SEVEN24’s current projects include the hit family series Heartland – the longest running one-hour series in Canadian history – now in its fifteenth season for CBC, Netflix and UPtv, Wynonna Earp on Syfy and CTV Sci-Fi, and half hour comedy JANN for CTV and Hulu.

SEVEN24’s focus on integration of scripted programming with interactive content and social media has helped make Heartland and Wynonna Earp two of the most dynamic scripted television projects in the digital space.

Tom Cox and Jordy Randall were also co-producers on numerous high-profile feature films including the Academy Award nominated Brokeback Mountain and are both recipients of the Queen Elizabeth II Diamond Jubilee Medal in recognition of their contribution to the arts.