Survivor Reclaims the Top Spot as the #1 Reality Series 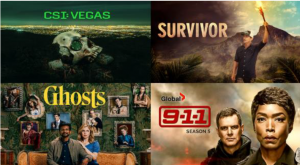 TORONTO, November 10, 2021 – Global jumpstarts the 2021-22 TV season – scoring number one’s across the board. Home to the #1 new and overall series, CSI: Vegas, and #1 reality show Survivor, Global currently claims 6 of the Top 10 and 10 of the Top 20 most-watched programs in Canada for total viewers. With more Top 20 series than any other network for total viewers and the core A25-54 demo, Global’s primetime offering wins the night for Monday, Tuesday, and Wednesday, and is tracking to become primetime’s most-watched network this fall.

Over on Corus’ streaming platforms, Global’s newcomers Ghosts, NCIS: Hawai’i and CSI: Vegas, all land in the Top 20 on STACKTV and The Global TV App. Taking the lead as the most-streamed primetime series on both platforms is Survivor, with the premiere becoming the most-watched episode in the Global TV App’s history. Global’s lineup of hit series are available to stream anytime live and on-demand with STACKTV, the Global TV App and GlobalTV.com.

NEW SERIES
Global delivers huge wins across its slate of new series owning 4 of the Top 5 most-watched new programs. Leading the pack is CSI: Vegas, the sequel to the world phenomenon series, CSI. After debuting with over 2 million viewers, the new smash hit averages 1.8 million viewers, securing a spot in the Top 10 across all key demos.

The NCIS franchise has another hit on their hands with the latest instalment, NCIS: Hawai’i. As one of the first new shows to receive a full season order, the freshman series climbs up the ranks as the second most-watched new show with an average audience of 1.5 million viewers each week, becoming a Top 20 performer across all key demos.

Rounding out Global’s new series success is comedy breakout hit Ghosts. The spirted new comedy has enchanted audiences, premiering with nearly 1.4 million viewers and averaging 1.26 million viewers each week. As Global’s third new series with a full season order, receiving accolades from the Globe and Mail, the haunting new comedy also levitates as a Top 20 performer across all key demos.

RETURNING HITS
Global’s roster of established hits returned with a vengeance this fall. Following a year and half hiatus, Survivor is back to reclaim the throne as the most-watched reality series. Garnering an average of 1.7 million viewers each week, the reality champ is the #1 series for key demos A25-54 and A18-34.