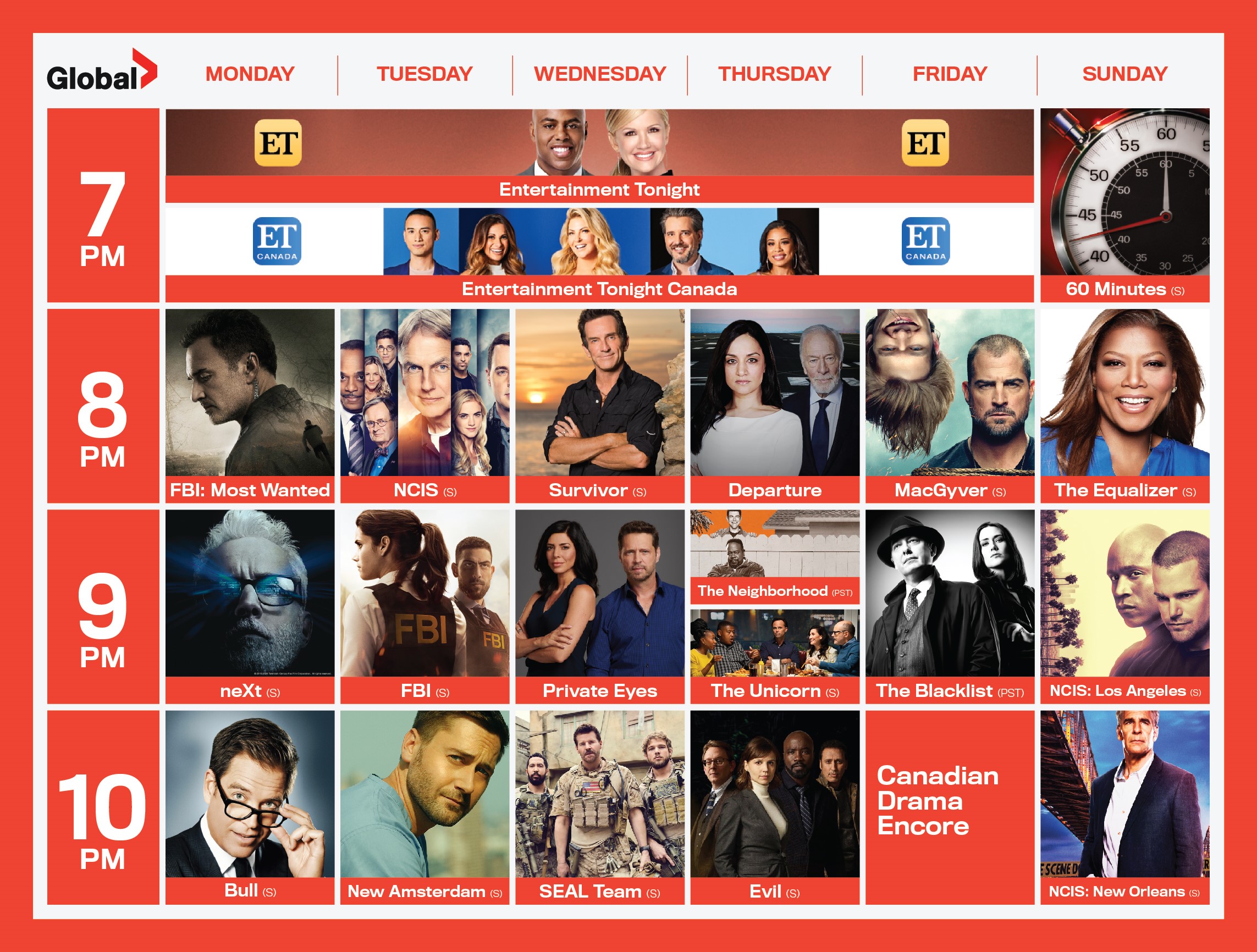 NEW FALL PRIMETIME SERIES
Departure
Departure is a six-part event series that follows the investigation into the shocking disappearance of Flight 716, a passenger plane that vanishes over the Atlantic Ocean. Brilliant investigator Kendra Malley (Panjabi) is brought in by her mentor Howard Lawson (Plummer) to lead the team looking into the crash. Click here to watch the trailer.

The Equalizer
The Equalizer is a reimagining of the classic series starring Academy Award® nominee and multi-hyphenate Queen Latifah (Chicago, Bessie) as Robyn McCall, an enigmatic woman with a mysterious background who uses her extensive skills to help those with nowhere else to turn. McCall presents to most as an average single mom who is quietly raising her teenage daughter. But to a trusted few, she is The Equalizer – an anonymous guardian angel and defender of the downtrodden, who’s also dogged in her pursuit of personal redemption.

neXt
From creator and executive producer Manny Coto (24: Legacy) and executive producers and directors John Requa and Glenn Ficarra (This Is Us), neXt is a propulsive, fact-based thriller about the emergence of a deadly, rogue artificial intelligence that combines pulse-pounding action with a layered examination of how technology is invading our lives and transforming us in ways we don’t yet understand. Click here to watch the trailer.

RETURNING SERIES AND SPECIALS
In addition to Global’s star-studded new series, Global welcomes back an impressive roster of 30 perennial hits across all TV genres this fall.

COMEDY
Global packs on the laughs this fall with returning comedy favourites The Neighborhood starring Cedric the Entertainer and Max Greenfield and The Unicorn starring Walton Goggins.

Plus, fresh off its win of the coveted Golden Screen Award for Canada’s most-watched comedy or drama, smash-hit detective series Private Eyes Season 4 joins Global’s fall lineup. Featuring 12 new episodes, Shade (Jason Priestley) and Angie (Cindy Sampson) are back on the case and have their hands full of new twisty, thrilling, and dangerous cases to solve. Production partners Corus Entertainment and leading independent studio Entertainment One (eOne) are also proud to announce the renewal for Season 5 of the popular international hit series, which will air on Global later in 2021.

SPECIALS
Global celebrates the best of Canadian country music with 2020 Canadian Country Music Awards airing Sunday, September 27 at 9 p.m. ET/PT on Global. Uniting fans and an entire nation, this year’s broadcast will take place in both Toronto and Nashville and feature performances, collaborations, and some heartfelt surprise moments. With a backdrop of rolling hills and wide-open spaces, the CCMA’s are bringing country back to the country for this incredibly special show in an all-new format.

NEWS, FACTUAL, AND ENTERTAINMENT
Committed to providing Canadians with accurate, balanced, timely and comprehensive news coverage, Global News has become the #1 digital news brand in Canada** with content being consumed on more platforms than any other news outlet in the country. Global News continues into 2020/21 with flagship newscast Global National, and local daily newscasts across the country.

New this fall, Emmy® Award-winning newsmagazine 60 Minutes, and the award-winning law and justice series 48 Hours, join Global’s repertoire of compelling investigative storytelling and crime genre, along with a new season of Global’s Crime Beat, a true crime series that takes viewers deep into some of Canada’s most infamous criminal cases.

For the lifestyle and entertainment lovers, The Morning Show returns with a new season featuring celebrity guests, lifestyle contributors, and fun informative segments. Hosted by Jeff McArthur and Carolyn MacKenzie, The Morning Show touches on all the trending topics that Canadians are talking about. Then, always delivering the latest in entertainment news, ET Canada returns for a 16th season. Hosted by Cheryl Hickey, with Senior Entertainment Reporter Roz Weston, Entertainment Reporters Sangita Patel and Carlos Bustamante, Correspondent Keshia Chanté, and Digital Reporters Graeme O’Neil and Morgan Hoffman, ET Canada continues to bring viewers closer to the stars with exclusive interviews and specials with the biggest celebrities in Hollywood.

A full list of premiere dates and times from Global’s fall lineup will be announced soon.

Global’s award-winning lineup of hit series are available to stream anytime on GlobalTV.com and the Global TV app. The Global TV App recently added Adult Swim and National Geographic to the platform, giving viewers even more premium content alongside its suite of top specialty networks including Food Network Canada, HGTV Canada, W Network, HISTORY®, Showcase, Slice, and free, 24/7 access to local and national news feeds from Global News. Download the Global TV App today and log in with a TV provider subscription to access shows like Rick & Morty, The Incredible Dr. Pol, Vikings, Island of Bryan, Top Chef Canada, Outlander, The Sinner, Vanderpump Rules and so much more. All series are available live and on demand with a subscription to that network.