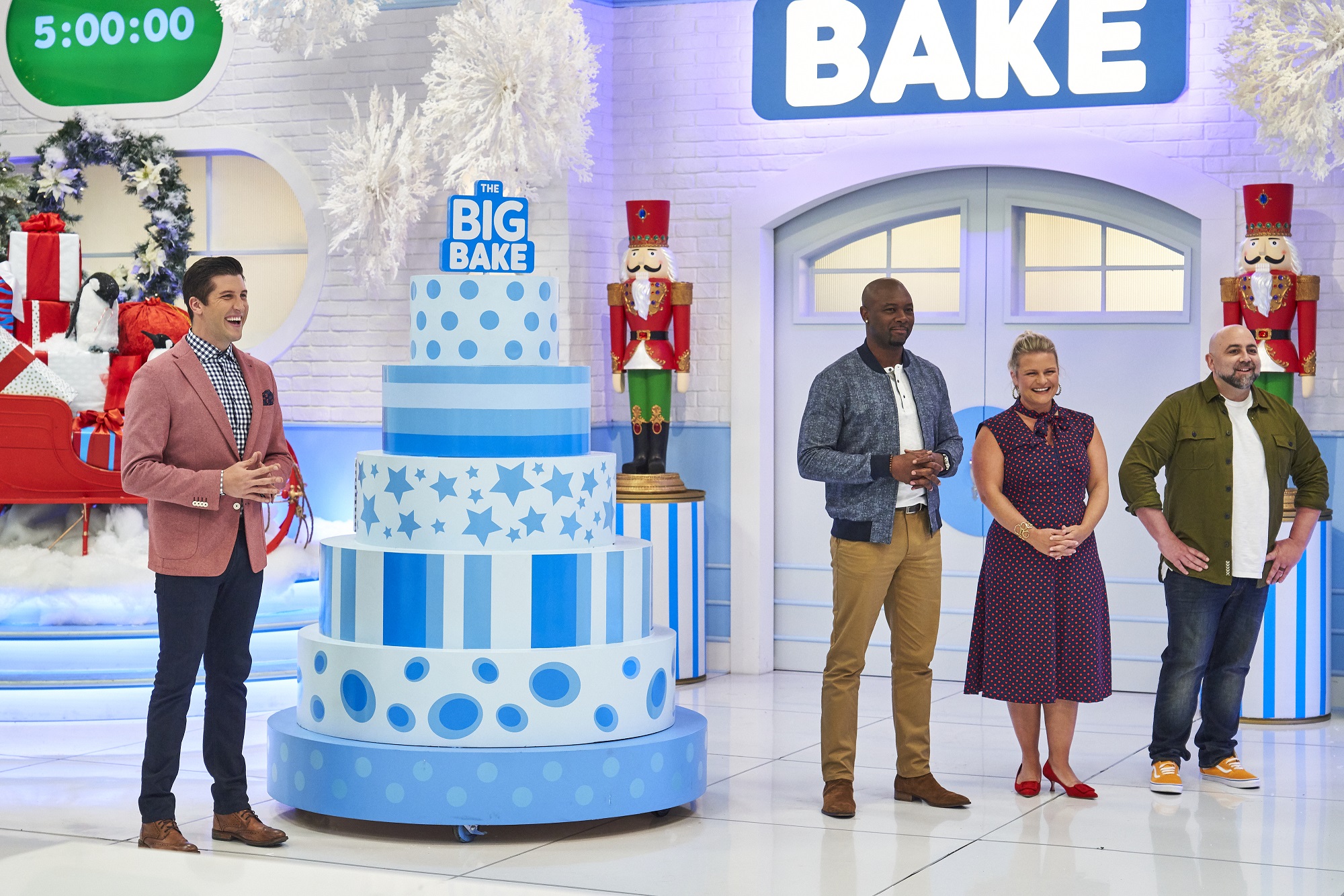 Watch the promo for The Big Bake: Holiday here

The Big Bake (18×60)
New episodes of The Big Bake: Holiday premiere November 4 at 10 p.m. ET/PT
The Big Bake is a larger-than-life holiday baking competition series with themed Halloween (4×60), holiday (7×60) and spring (7×60) episodes. In each episode, three professional baking teams have five hours to design, bake and decorate a grand-scale cake creation based on a particular theme. These bakers need to think big and bold, blowing up their designs to gigantic proportions and thinking outside the (bakery) box. In the end, the most Ambitious, eye-popping and delicious cake will go home with a $10,000 prize. The Big Bake is hosted by television personality and restaurateur, Brad Smith, with resident judges, celebrity chef Eddie Jackson, and author and television personality Harry Eastwood.

Christmas Cookie Challenge, Season 3 (8×60)
New season premieres November 10 at 9 p.m. ET/PT
In Christmas Cookie Challenge, five confident and daring bakers compete to prove their holiday cookie-making skills for the $10,000 prize. Host Eddie Jackson returns with lead judge Ree Drummond and are joined by a rotating panel of guest judges such as Gesine Prado and Aarti Sequeira to crown the winner.

Santa’s Baking Blizzard (4×60)
New series premieres November 28 at 9 p.m. ET/PT
On each episode, Casey Webb challenges three teams of the country’s most impressive ice sculptors and cake artists to create larger than life Christmas scenes for judges Jocelyn Delk Adams, Amanda Freitag and Zac Young. Teams must push their limit to bring festive holiday themes to life if they want to ice the competition and sleigh their way into the finale where they will compete for a stocking full of $25,000.

Teeny Tiny Christmas (1×60)
New special premieres November 30 at 9 p.m. ET/PT
Artist Jay Baron, known for his viral videos of tiny food, is preparing edible miniature food for the holidays with his wife and sous chef, Lesly. Together they make an entire Christmas meal with festive appetizers and a teeny tiny Christmas ham. They provide a rare behind-the-scenes look at how it’s done on a miniature scale.

12 Foods of Christmas (1×60)
New special premieres November 30 at 10 p.m. ET/PT
Ever since their first Christmas song parody “Christmas Jammies” went viral in 2014, Penn and Kim Holderness and their kids are hoping to create the next sensational Christmas video. As they look for inspiration, they hit the road to try some tasty holiday bites and get answers to famous holiday questions.

Holiday Wars (4×60)
New series premieres December 1 at 10 p.m. ET/PT
Hosted by Jonathan Bennett alongside judges Shinmin Li and Jason Smith, Holiday Wars brings together talented teams competing in two jolly rounds. The first is the “Snowball Fight” challenge, where the artists must use cake and sugar to create an edible holiday design in just 45 minutes. In the “Winter Blizzard” challenge, the teams are tasked with developing a masterful Christmas display made up entirely of cake and sugar. At the end of the battle, one team will jingle all the way home with a $25,000 grand prize.

Ultimate Hanukkah Challenge (1×60)
New special premieres December 21 at 9 p.m. ET/PT
Molly Yeh hosts as four chefs are tested to put their creative spin on some of the holiday’s classic dishes. Inspired by the Festival of Lights, four seasoned chefs must pull out all the stops as they craft deliciously innovative dishes for judges Duff Goldman and Sharone Hakman. Over the course of three rounds, the chefs must put their spin on holiday classics like crispy potato pancakes, succulent brisket and fried jelly donuts. The last cook standing will win a vacation and the title of Ultimate Hanukkah Champion.

Cake-Off: New Year’s Eve (1×60)
New special premieres December 29 at 10 p.m. ET/PT
Four professional bakers from around the country compete in unconventional baking and design challenges where flavor is only the tip of the icing. The bakers must capture change through the years in their innovative New Year’s Eve cakes, but there’s a catch – the cakes must also transform from old to new. The competitor who wows judges Duff Goldman, Dan Langan and Waylynn Lucas with the most over-the-top edible work of art will be crowned winner and earn the $10,000 grand prize.

The Big Bake is produced by Architect Films in association with Corus Studios for Food Network Canada. Executive Producers are Mike Sheerin and Tanya Linton and Series Producer is Jennifer Pratt.