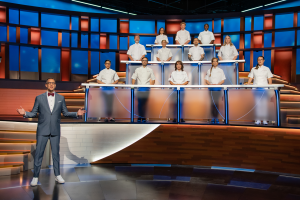 TORONTO, February 2, 2022 – No whisk, no reward! Food Network Canada introduces the ultimate baking competition Wall of Bakers (10×60), a spin-off of Wall of Chefs, which was ranked a Top 10 program on the network in spring and fall 2020*. This series tests the precision skills of Canada’s home bakers as they battle in three rounds of captivating competition, in front of a dozen of the country’s most accomplished pastry chefs. As the hopeful home bakers rise to the challenge, they’ll set their sights on the $10,000 grand prize and the title of Wall of Bakers champion. The Corus Studios original makes its sweet debut March 28 at 10 p.m. ET/PT on Food Network Canada.

Wall of Bakers features an expert panel of 24 of the country’s biggest names in baking on rotation throughout the season. The pastry chefs offer their expertise in each round, all while tasting, judging and eliminating one home baker. Ultimately, they decide who takes the cake.

The Wall of Bakers judges include:

In each stand-alone episode of Wall of Bakers, host Noah Cappe (Wall of Chefs, Carnival Eats) leads four amateur bakers to face off in three rounds of sweet competition. In the first “Crowd-Pleaser” round, they prepare their own personal ‘signature’ desserts. In the second “Baker’s Pantry” round, they are challenged to come up with a dessert using two ingredients that are staples in the pantry of one of the chefs on the Wall. In the third and final “Bakery-Worthy” round, the last two home bakers are inspired by a chef’s signature confection to make their own bakery-worthy creation.

Throughout the season, the determined batch of bakers will push their pastry talents to the limit as they are tasked with using mandatory ingredients and pairings such as tahini and dark chocolate, black sesame paste and bananas, apple butter and rosemary and more. Each episode also incorporates themes to inspire creativity in their baked goods including re-inventing a classic dessert, carnival treats, spiced infusions and experiments with flavour combinations.

Foodnetwork.ca offers exclusive Wall of Bakers content, including a closer look at the cast of pastry chefs from across the country, inspiring recipes and more.

Wall of Bakers is produced by Insight Productions (a Boat Rocker Company) in association with Corus Studios for Food Network Canada. Executive Producers are John Brunton and Eric Abboud and Series Producer is Erica Lenczner. For Corus Studios and Food Network Canada, Marni Goldman is Executive in Charge of Production, Krista Look is Vice President of Original Lifestyle Content and Lisa Godfrey is Senior Vice President of Original Content and Corus Studios.

About Insight Productions Ltd.
Insight Productions (a Boat Rocker company) is known for its award-winning ratings juggernauts and is Canada’s most established content producer and an industry leader in the development, financing, and production of hit programming. The company has created some of the most dynamic and top-rated programs, including Canada’s New Year’s Eve: Countdown, The Amazing Race Canada (the most watched Canadian show on record), ratings hits Big Brother Canada and The JUNO Awards, and original formats including Battle Of The Blades. Insight produced The Tragically Hip: A National Celebration, a live concert special on CBC watched by one in three Canadians. Insight Productions was founded in 1979 and has since created thousands of hours of ground-breaking content. For more information on Insight Productions, please visit www.insighttv.com or on Twitter @insightprod or Facebook www.facebook.com/InsightProductions.