Green and Gold back for 29th season with iconic Edmonton station 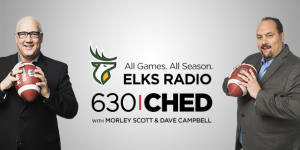 “The Elks are an integral part of the sports scene in Edmonton,” said John Vos, Regional Program Director, Corus Radio. “With the Elks’ deep ties to the community, our continued broadcast partnership is a natural fit for 630 CHED.”

Fans will once again be treated to the veteran tandem of play-by-play announcer Morley Scott and analyst Dave Campbell, as the duo return to The Brick Field at Commonwealth Stadium for their 12th season together.

Each broadcast will feature a 90-minute pre-game show and a 90-minute post-game show hosted by Brenden Escott, who moves upstairs after handling sideline reporting duties.

The new deal is a win-win for the Elks and 630 CHED, which has been the home to some of the most iconic moments in Edmonton football history.

“Hearing the Green and Gold on 630 CHED feels like home. Like thousands of loyal fans, I grew up listening to the legendary Bryan Hall, as he brought to life the moments that defined Edmonton gridiron greatness,” said Elks President and CEO Victor Cui. “Morley Scott and Dave Campbell have built on 630 CHED’s tradition of excellence in the broadcast booth and are the perfect pair to bring our fans what promises to be an exciting 2022 season.”

Morley and Dave are set to broadcast every Elks pre-season, regular season, and West Division playoff game, beginning with 630 CHED’s pre-season coverage on Friday, May 27 when the Elks travel to take on the defending Grey Cup champion Winnipeg Blue Bombers.

Elks season seats are currently on sale, with single-game tickets set to launch early next month.

About The Edmonton Elks Football Club

The Edmonton Elks are proud members of the Canadian Football League, playing their home games at The Brick Field at Commonwealth Stadium in Edmonton, Alberta. The club has a tradition of excellence with 14 Grey Cup championships (1954-56, 1975, 1978-82, 1987, 1993, 2003, 2005, 2015) and 52 members of the Canadian Football Hall of Fame. Since its founding, the club has been community-owned and remains focused on providing outstanding football memories for Edmonton and all of Northern Alberta.