DESCENDANTS OF WORLD WAR I AND II VETERANS DISCOVER THEIR ANCESTORAL TRUTH IN OUR WAR, PREMIERING NOVEMBER 11 ON THE HISTORY® CHANNEL

DESCENDANTS OF WORLD WAR I AND II VETERANS DISCOVER THEIR ANCESTRAL TRUTH IN OUR WAR, PREMIERING NOVEMBER 11 ON THE HISTORY® CHANNEL

Epic Stories are Reveals From World War I and II Contributors in New Canadian Docu-Series, Our War, Premiering Remembrance Day 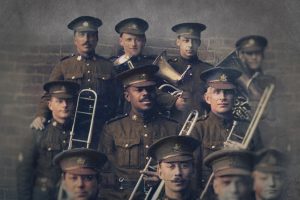 TORONTO, October 11, 2022 – This Remembrance Day, The HISTORY® Channel commemorates diverse heroes of World War I and II with the new Canadian Original docu-series, Our War. Over two, one-hour episodes premiering back-to-back on Friday, November 11 at 9 p.m. ET/PT, the epic stories of these forgotten heroes are told through their modern-day descendants, who discover the harrowing secrets of their ancestors. Developed and produced by Lark Production’s award-winning team, Our War takes viewers on a real-life genealogical investigation that reveals the past through a younger generation.

Each story in Our War unfolds with a burning question that demands an answer. Whether it’s deciphering a deathbed confession or unearthing the truth behind a family legend – the series follows each descendent as they scour museums and archives, clue by clue, to unearth the harrowing secrets their kin took to the grave. Every mystery solved will uncover who each ancestor truly was, bringing their family members closer to understanding themselves.

The premiere episode begins with the great-great granddaughter of one of Canada’s first Black servicemen as she searches for a memorial plaque awarded to the next-of-kin of those killed in World War I. Through her search, she learns how her great-great grandfather found himself on the frontlines of Canada’s most famous battles, and is ultimately led to a poignant discovery about his sacrifice in the war. In the second episode, a teenaged descendant of legendary Onondaga Runner, Tom Longboat, learns of his ancestor’s valiant, yet little known, actions during The Great War. Initially bonding with Longboat over a shared love of sport, he eventually learns that his great-great-great grandfather was much more than just a runner.

Our War is produced by Lark Productions for The HISTORY® Channel. Executive Producers are Erin Haskett, Aynsley Vogel and Ruth Nanda who serves as Series Producer and Co-Executive Producers Tex Antonucci and Jean Parsons. Directors/Directors of Photography are Michael Bourquin and Zach Williams. Narration by Jessica Garcie. For The HISTORY® Channel, Kathleen Meek and Maria Knight are Executives in Charge of Production, Rachel Nelson is Vice President of Original Scripted and Factual Content and Lisa Godfrey is Senior Vice President of Original Content and Corus Studios.

The HISTORY Channel is a Corus Entertainment Network.