A Fresh Batch of 10 Talented Home Bakers Vie for the $50,000
Grand Prize and Title of Great Chocolate Showdown Champion 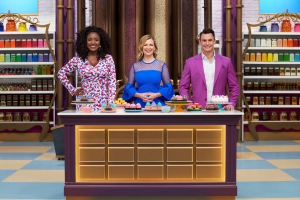 TORONTO, January 17, 2021 – Great Chocolate Showdown, which reached over 2.8 million Canadians during its second season on Food Network Canada,* is back with a fresh batch of 10 highly skilled home bakers who will go head-to-head in this decadent dessert competition. Each week they will have their baking skills and creativity in the kitchen put to the test through a series of chocolate-based challenges. Quaker® Canada joins this season as a sponsor, supplying their premium Quaker® Oat Flour to be used by the competitors in making their delectable cocoa creations. The third season of Great Chocolate Showdown premieres March 1 at 9 p.m. ET/PT on Food Network Canada.

This season’s diverse group of brilliant bakers hail from across North America. While their ages, professions and baking experience vary, they are united by their love for baking and all things chocolate. They will be tasked with challenges that include creating a chocolate carousel filled with marvelous mini desserts, crafting a cocoa confection inspired by a passion for fashion, making a decadently delicious chocolate pasta dish, and more. Come the epic season finale, only three bakers will remain to battle it out in the most demanding dessert competition yet.

The home bakers taking on the biggest chocolate challenge of their lives, vying to be crowned ‘Great Chocolate Showdown Champion’ and win the $50,000 grand prize are:

This season, Quaker® Canada stocks the pantry with a variety of products and each week the competitors will be able to use Quaker® Oat Flour in the creation of their delicious baked goods. The brand will also have an integrated episode challenge that will see the bakers take a cherished memory of their favourite childhood dessert and use it as inspiration to create a scrumptious brunch dish.

On foodnetwork.ca, viewers can learn more about the series and its cast and competitors, see exclusive behind-the-scenes content, recipes and delicious how-tos with the judges after the episodes air.

As previously announced, The CW Network has acquired Corus Studios’ Great Chocolate Showdown, Season 1, which is set to air January 29 at 8 p.m. ET.