Four Fearless Explorers Embark on a Treacherous Mission to Find Lost Gold in the Mountains of B.C. 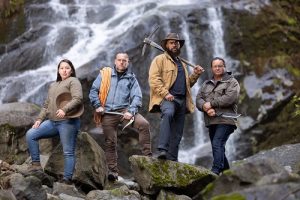 TORONTO, July 27, 2022 – New this fall, four fearless explorers band together to solve the legend of Slumach’s lost gold mine in Deadman’s Curse (8×60), premiering Sunday, September 11 at 10 p.m. ET/PT on The HISTORY® Channel, and distributed by Corus Studios. The treasure’s mysterious location has eluded prospectors for generations. In its pursuit, the team must face extreme weather, unforgiving terrain, and a 100-year-old curse all while chasing cryptic clues. Making up this dynamic group is prospector Kru Williams, mountaineer Adam Palmer, Indigenous explorer Taylor Starr and her father Don Froese.

A distinct variety of skills is required to venture through the same land as Slumach, an Indigenous man rumoured to have discovered a lucrative stash of gold in the mountains of British Columbia. Kru’s obsession with the Slumach legend led him to Adam, whose help he needs to get through some of the world’s most difficult terrain. However, finding the treasure also means solving the mystery. Enter Taylor and her father Don, who both have an intimate knowledge of the land and a very personal connection to the story. As Slumach’s great-great niece, Taylor is determined to uncover the truth about the legend, the curse, and the gold.

The premiere episode introduces the legend and curse of Slumach’s lost gold mine, giving a glimpse into what it will take to find the treasure and solve the mystery. The search starts with Adam and Kru following a clue that leads them on a dangerous journey many have not come back from. Meanwhile, Taylor aims to separate fact from fiction and searches for the truth about the man behind the legend.

Deadman’s Curse is a HISTORY® Channel Original produced by Great Pacific Media TV and distributed by Corus Studios. Executive Producers are David Way, Michael Francis, Tim Hardy, and Todd Serotiuk, and the Series Producer is Tim Hardy. For The HISTORY® Channel, Maria Knight is the Executive in Charge of Production, Kathleen Meek is the Manager of Original Content, Rachel Nelson is Vice President of Original Factual, Scripted and Kids Content and Lisa Godfrey is Senior Vice President of Original Content and Corus Studios.

The HISTORY® Channel is a Corus Entertainment Network.