The Awesome Brawlers Of Bakugan Are Back With A Brand New Season Of Bakugan: Geogan Rising

THE AWESOME BRAWLERS OF BAKUGAN ARE BACK WITH A BRAND NEW SEASON OF BAKUGAN: GEOGAN RISING 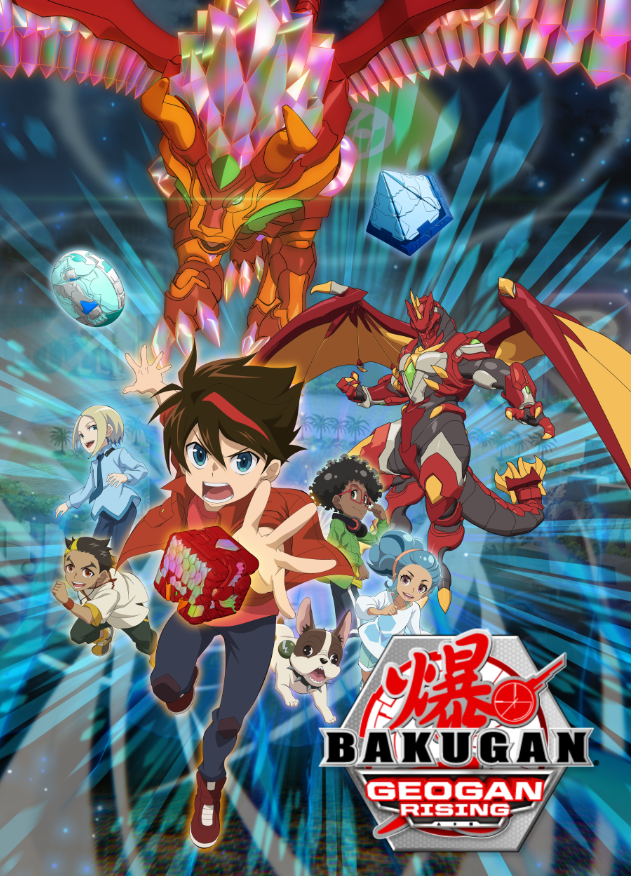 TORONTO, January 21, 2021 –Corus Entertainment’s Nelvana, Spin Master Ltd. and TMS Entertainment welcome back the Awesome Brawlers as hit series BAKUGAN® returns with a third season of high-flying action and adventure with Bakugan: Geogan Rising (52 x 11 min). The new season of the hugely popular show premieres Sunday, January 24 at 12 p.m. ET on Corus Entertainment’s TELETOON in Canada, with new episodes weekly. The series is available to stream live and on demand on STACKTV through Prime Video Channels, where viewers can also catch up on Seasons 1 and 2. Following the launch of the new season, Spin Master is rolling out a new and exciting  Bakugan: Geogan Rising toy line featuring incredible transforming creatures inspiring action-packed adventures  in North America in February 2021, with an additional set of toys rolling out in international markets in Fall 2021.

“We’re incredibly proud to bring Bakugan: Geogan Rising into the esteemed Bakugan franchise as the brand continues to captivate audiences globally,” said Mellany Masterson, Head of Nelvana Enterprises. “Together with Spin Master we’ve grown a loyal fan base who love all things Bakugan and the international success is a testament to the dynamic content and new storylines delivered each season.”

Bakugan: Geogan Rising sees hero Dragonoid return as the Awesome Brawlers remain in a deep slumber, healing from the last time they had to save the world. This time, the gang will face adventures with a new set of Bakugan characters including Geogan, a Bakugan-like creature fused with elements of crystals and forming a new geometric form. Not only do Geogans look different than their Bakugan counterparts, but they are exceptionally strong and built to brawl. It’s not long before the Awesome Brawlers turn this group of misfit Bakugan into loyal partners, and Geogan have arrived on the scene, ready to prove their worth and dominate in the Bakugan battle arena.

About Nelvana
Entertaining kids for nearly 50 years, Nelvana is a world-leading international producer and distributor of children’s animated and live-action content. Nelvana produces a stable of award-winning and globally renowned brands that focus on comedies, preschool and boys action series and ancillary consumer products programs. Nelvana’s content airs on Corus Entertainment’s kids channels in Canada and in over 160 countries around the world. The Nelvana library has well over 4,400 episodes of programming and has received over 70 major international program awards including Emmys® and Canadian Screen Awards. Visit the Nelvana website at nelvana.com.

About Spin Master
Spin Master Corp. (TSX:TOY) is a leading global children’s entertainment company creating exceptional play experiences through a diverse portfolio of innovative toys, entertainment franchises and digital toys and games. Spin Master is best known for award-winning brands PAW Patrol®, Bakugan®, Kinetic Sand®, Air Hogs®, Hatchimals® and GUND®, and is the toy licensee for other popular properties.  Spin Master Entertainment creates and produces compelling multiplatform content, stories and endearing characters through its in-house studio and partnerships with outside creators, including the preschool success PAW Patrol and 10 other television series, which are distributed in more than 160 countries. The Company has an established digital presence anchored by the Toca Boca® and Sago Mini® brands, which combined have more than 25 million monthly active users. With over 1,800 employees in 28 offices globally, Spin Master distributes products in more than 100 countries. For more information visit spinmaster.com or follow on Instagram, Facebook and Twitter @spinmaster.