Dive In to a Sea of Adventure on YTV with New Series Kamp Koral: SpongeBob’s Under Years and The Patrick Star Show on October 3

Tune In to Treehouse for Imaginative and Educational Preschool Programming with Thomas & Friends: All Engines Go! On September 18, Little Ellen on October 1 and The Wiggles: Live from Hot Potato Studios on October 9

Stream YTV, TELETOON, and Treehouse Live and On Demand with STACKTV 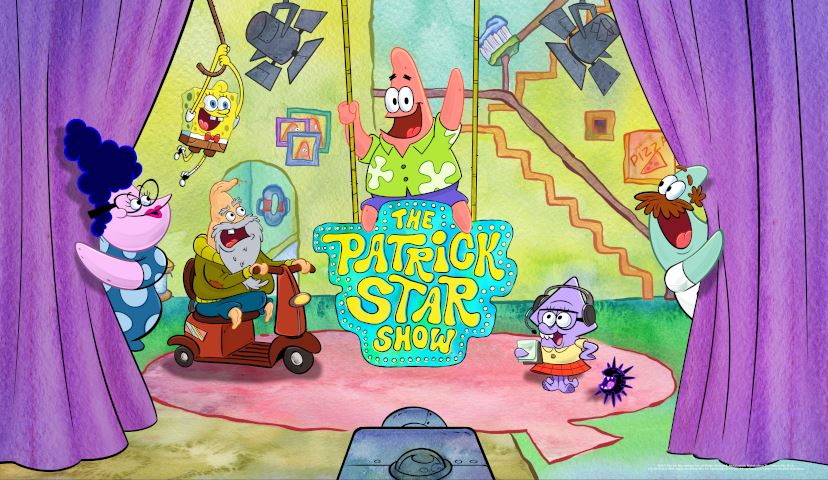 TORONTO, September 13, 2021 – Corus Entertainment’s top kids networks, YTV, TELETOON, and Treehouse, announced today a fun-filled fall lineup of hit shows with iconic comedic characters, heartfelt preschool stories, and live-action adventures for everyone in the family to enjoy. With highly anticipated spinoffs of LOL series like SpongeBob SquarePants, reimaginings of animated classics like Animaniacs and Looney Tunes Cartoons, and continued seasons of adored series like Sesame Street, Corus continues to reign as the leader in kids’ and family entertainment.  Plus, all hit shows on YTV, TELETOON, and Treehouse are available to stream live and on demand on STACKTV, through Amazon Prime Video Channels.

The fulsome YTV fall schedule kicked off on September 4 with the entertaining antics of exuberant raincloud, Parker J. Cloud in Middlemost Post, with new episodes every Saturday at 9 a.m. ET/PT. In Middlemost Post, Parker J. Cloud lives and works in the Middlemost Post Office with Angus, a burly, rule-abiding mailman who cherishes his solitude and values efficiency, and Russell, their magical pet walrus whose stomach is so big that it doubles as a storage room. Together they journey through Mount Middlemost and the six territories of Somewhere to deliver the mail, while meeting some exceptionally quirky and peculiar people along the way. But, as this loving and unconventional trio grows closer, they remain blissfully unaware that they have been brought together by one fateful stormy event.

Then, on September 4 YTV travelled to the magical land of TrollsTopia, Season 2, with new episodes every Saturday at 10 a.m. ET/PT. Inspired by the beloved DreamWorks Animation films, TROLLSTOPIA is the next chapter in the hair-raising adventures of the trolls. In Season 2, friendships between the tribes are stronger than ever with the arrival of “Pal-entine’s Day” and the help of the new Metroll train station, connecting all of the neighborhoods together. But when Chaz, a smooth jazz troll arrives, Poppy realizes she accidentally excluded an entire tribe from TrollsTopia and must do everything she can to make her new friends feel at home.

New episodes of Kid Food Nation: The Show, Season 2 continue on Wednesday, September 22 at 6:30 p.m. ET/PT. With the help of KFN Heroes, cooks with local know-how, and well-known Canadian chefs, YTV’s Spencer and Tyra take the viewer on a food tour to explore the science, ingredients, and cultures of cuisine. Jam-packed with taste tests, fascinating food facts and easy to create recipes, this delicious series puts the power of food into the hands of kids.

The Croods: Family Tree premieres on Saturday, October 2 at 9 a.m. ET/PT. The Croods: Family Tree series, inspired by the blockbuster DreamWorks Animation film The Croods: A New Age, continues the ever-evolving story of the Croods and the Bettermans as they learn to live together on the most idyllic farm in prehistory. The journey from sparring rivals to unlikely friends is fraught with hilarious misadventures as the two families slowly overcome their differences to turn a tree house divided into a tree home united. Kelly Marie-Tran returns as the voice of “Dawn” alongside new addition Amy Landecker as “Ugga.” Mark Banker (Go, Dog. Go!) and Todd Grimes (The Epic Tales of Captain Underpants) serve as executive producers.

Who lives in a pineapple under the sea? This fall, YTV is home to two spinoffs of one of the top 3 animated series on YTV last fall*, SpongeBob SquarePants! Beginning with Kamp Koral: SpongeBob’s Under Years on Sunday, October 3 at 9 a.m. ET/PT, the CG-animated prequel follows 10-year-old SpongeBob SquarePants and his pals as they spend their summer building underwater campfires, catching wild jellyfish, and swimming in Lake Yuckymuck at the craziest camp in the kelp forest, Kamp Koral. Then, stay tuned-in to The Patrick Star Show on Sunday, October 3 at 9:30 a.m. ET/PT, following a younger Patrick Star living at home with his family, where he hosts his own variety show for the neighbourhood from his television-turned-bedroom.

It’s back to school season at Swellview Academy, with the premiere of Danger Force, Season 2 on Saturday, October 16 at 8 p.m. ET/PT. Danger Force follows the students of Swellview Academy for the Gifted (SW.A.G. for short), a school conceived by Captain Man and brought to life by Schwoz (Michael D. Cohen), as they continue to learn to harness their frequently troublesome and sometimes uncontrollable superpowers while fighting crime. Chapa (Havan Flores), Miles (Terrence Little Gardenhigh), Mika (Dana Heath) and Bose (Luca Luhan) must keep their real identities a secret from both their families and the villains who are out to destroy them.

Also coming to YTV this fall is a new season of Archibald’s Next Big Thing Is Here!, and it’s a family affair as The Casagrandes returns for a third season on September 18 at 11 a.m. ET/PT.

YTV is available on a National Free Preview from November 1 to December 18. Please check local listings for additional details.

Hold on to your hats, New York! Beginning Saturday, September 18 at 9 a.m. ET/PT, hilarious cat and mouse duo Tom and Jerry are headed to New York City in the HBO Max Original series Tom & Jerry in New York, where Tom is the resident mouser at the 5-star Royal Gate Hotel – and Jerry is the up-to-no-good resident mouse. Join Tom, Jerry, Spike the bulldog, Butch the alley cat, and all of their fun, fuzzy friends as they explore the Big Apple’s world-famous landmarks, subways, and back alleys. Accompanied by a selection of original songs, our beloved characters show off their fancy, furry footwork in fun-filled action that never lets up. Tom and Jerry in New York is produced by Warner Bros. Animation.

Viewers are welcome to visit the charming town of Jellystone!, beginning Sunday, October 10 at 9 a.m. ET/PT. The HBO Max Original series follows an ensemble of Hanna-Barbera characters as they live, work, play, and (as is often the case), destroy the town in some silly way together.  Huckleberry Hound proudly serves as the town’s mayor; Cindy, Boo Boo and Yogi are the town’s medical staff; Jabberjaw works at Magilla’s clothing store where they supply all the bow ties and hats to the town’s citizens; and every character has a specific role in the community. Their paths cross in fun and ridiculous ways, turning everyday activities into hilarious pandemonium.

Also debuting this fall is the HBO Max Original series Aquaman: King of Atlantis. Produced by Warner Bros. Animation, the series begins with Aquaman’s first day on the job as king of Atlantis, and he has a lot of catching up to do! Luckily, he has his two royal advisors to back him up: Vulko, the scholar, and Mera, the water controlling warrior-princess. Between dealing with unscrupulous surface dwellers, elder evils from beyond time, and his own half-brother who wants to overthrow him, Aquaman is going to have to rise to the challenge and prove to his subjects, and to himself, that he’s the right man for the trident.

Then, the gang is back again with new episodes of Animaniacs, Season 2 returning this fall. Yakko, Wakko and Dot return for an all-new season of this iconic, family-friendly series with something for everyone: pop culture parodies, musical showstoppers, takedowns of historical baddies…and even some important safety tips. Join the Warners and Pinky and the Brain as they wreak havoc everywhere they go, from the Warner Bros. lot to an international beauty pageant and all the way into outer space. And keep an eye out for season one favorites Starbox & Cindy, as well as some rejected Animaniacs characters that were left on the cutting room floor. Animaniacs is produced by Amblin Television in association with Warner Bros. Animation.

TELETOON is available on a National Free Preview from October 1 to October 31. Please check local listings for additional details.

The little engine that could rolls onto the Treehouse schedule with a brand new 2D-animated look! Thomas & Friends: All Engines Go! premieres Saturday, September 18 at 8:50 a.m. ET. Adventure and excitement abound for Thomas and his friends as they work together to form lasting bonds that help them overcome any obstacle on the Island of Sodor.

The highly anticipated animated series Little Ellen joins the Treehouse schedule on Friday, October 1 at 1 p.m. ET. In this original series from Warner Bros. Animation, 7-year-old Ellen DeGeneres is a hilarious, imaginative, and big-hearted kid navigating life in New Orleans alongside her wise and eccentric Gramsy, musical best friend Freckle, fashion-forward cousin Becky, and clever cat Charlie. Along their adventures, Ellen and her band of heroes find fun in everyday challenges. They help a lonely macaw make a friend, cheer up a sad storm cloud, find a new home for a lost puppy and even hit the stage with a musical legend! With the Big Easy as a backdrop, where there’s no shortage of good food, great music, and incredible people to share their stories, Little Ellen has a little bit of something for everyone!

Then, adored yellow wiggle Emma! returns with Season 3 this fall in an all-new, 11 minute, 13 part series which extends and deepens on all of the much loved aspects of Emma. The series includes all new elements of mindfulness practices, STEM concepts, nature discovery segments, arts, crafts and activities for families to try at home together. Emma also introduces her never before-seen ‘Bow Power’, which helps her think through problems and complexities that arise during the show.

Everyone’s favourite monsters are back for even more fun as Season 52 of the childhood classic Sesame Street debuts this November. Catch Elmo, Abby, and Cookie Monster as the team takes on playful problem-solving by exploring how you learn. From building a robot dog to performing in a Grouch band to visiting a farm — these furry friends are learning while having so much fun! Join the whole Sesame Street gang as they problem-solve in each situation and ask themselves, “I wonder,” “What if?,” and saying, “let’s try,” working through their ideas until they find a solution to the problem.

Everyone’s favourite furry red friend Elmo returns this fall with Season 2 of The-Not-Too-Late Show with Elmo. This season, Elmo returns as “the host with the most,” introducing more games, more musical guests, and lots of surprises. To the delight of preschoolers everywhere, this new season is action-packed and music-filled, the perfect co-viewing and co-doing experience for children and the adults in their life. Get ready for the whole new season – Elmo just welcomed his first contestant and he needs YOUR help!