The B Team featuring Shawna, Chris Z and Jay Brody Debuts on 102.1 the Edge 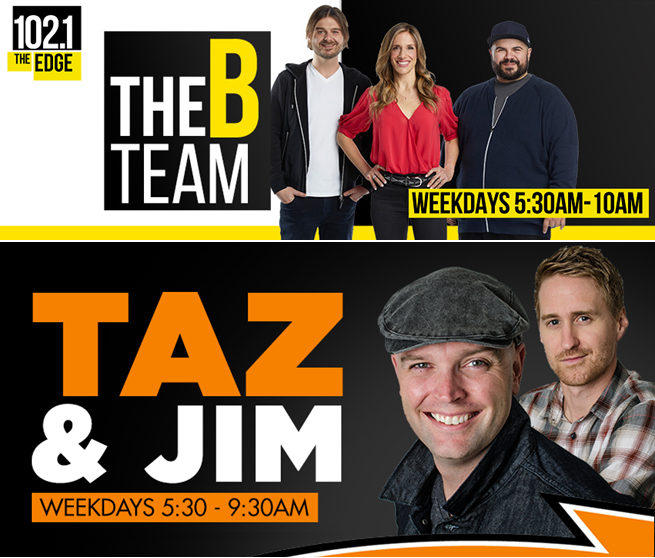 “We’re really excited to bring edge back to the Edge with one of the country’s most bold morning shows in The B Team,” said Tammy Cole, Toronto/Hamilton Regional Program Director for Corus Radio. “To deliver that, as well as expand Taz & Jim – who as a duo have dominated in a major Ontario market for almost a decade – to Hamilton in their place is great news for listeners on both the Edge and Y.”

Since teaming up to host the Y108 (CJXY-FM) morning show in 2018, Shawna, Chris Z and Jay Brody have become beloved locally, delivering their unique brand of hilariously edgy radio banter. The trio depart after a combined twenty years at the station; mainstays Shawna and Chris Z having co-hosted previous iterations of the morning show together, with newest member Jay Brody joining from a prior stint at SiriusXM.

Filling the vacated Y108 morning show slot is Taz & Jim, which made its debut on the station this morning. Hosted by one of Canada’s most successful rock radio duos in Taz and Jim Kelly, the pair have consistently ranked as the #1 rated morning team in the London, Ont. market since their show’s debut nearly a decade ago. In addition to airing live on Y108, Taz & Jim will continue to be live on FM96 in London – with local traffic, news and updates provided for both markets – weekdays from 5:30 a.m. – 9:30 a.m. ET.

102.1 the Edge and Y108 are part of the Corus Entertainment Network.