NELVANA GREENLIGHTS NEW SERIES MILLIE MAGNIFICENT, INSPIRED BY THE BEST-SELLING BOOK FROM KIDS CAN PRESS AND AWARD-WINNING SHORT FILM FROM NELVANA, THE MOST MAGNIFICENT THING 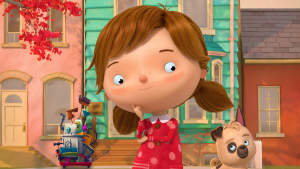 TORONTO, January 17, 2023 – Corus Entertainment’s Nelvana, a world-leading international producer, distributor, and licensor of children’s animated and live-action content, today announced the greenlight and start of production on its new CG animated series, Millie Magnificent (52×11). The new series announcement kicks off Kids Can Press’ year-long 50th Anniversary celebrations. The award-winning children’s book publisher also revealed the cover of a third book in The Most Magnificent franchise, to launch in Fall 2023. Inspired by Canadian author-illustrator Ashley Spires’ The Most Magnificent Thing, and following the success of the Nelvana-produced award-winning short film of the same name, the original preschool series Millie Magnificent has already received strong interest from international broadcasters and is set to deliver in 2024.

The picture book The Most Magnificent Thing, about a little girl who perseveres through a frustrating creative process, released in 2014 and became the keystone children’s book of the maker movement. With close to 800,000 copies sold to date, the book has been translated into 21 languages and continues to delight new readers. Its follow-up, The Most Magnificent Idea, which sees the same character working through a creative block, was the runaway bestseller of the 2022 fall and holiday season, having sold over 25,000 copies in just three months. In the original new preschool series Millie Magnificent, eight-year-old Millie is an avid inventor, creator, and problem-solver. With a spark of imagination and endless determination, Millie and her Creato-crew friends, Maya and Ben, together with her adorable canine assistant, Wallace, strive to find the most magnificent solutions to their neighborhood’s challenges.

“We are thrilled to kick off our 50th anniversary year with the news of yet another Kids Can Press franchise being made into an animated series by our colleagues at Nelvana,” said Lisa Lyons Johnston, President and Publisher of Kids Can Press. “The Most Magnificent Thing has resonated and inspired thousands of children around the world to foster their imagination and creativity, and we have loved watching Nelvana expand the universe of Ashley Spires’ beloved book, first to the big screen and now as an animated series.”

The new animated series is the second Nelvana adaptation of an Ashley Spires work published by Kids Can Press. Her Binky Adventure graphic novels inspired the 3D animated series Agent Binky: Pets of the Universe, produced by redknot, a joint venture company between Nelvana and Warner Bros. Discovery, and now in its third season, airing on networks around the world.

“Both Ashley Spires’ book and Nelvana’s short film have received tremendous accolades as it captured the hearts and minds of audiences around the world and motivated them to be like Millie — a creative thinker who always goes out of her way to help others,” said Athena Georgaklis, Head of Development, Nelvana. “We’re delighted to kick off production and onboard a female-led team to work on the series, including our very own Ruth Ramirez to direct and industry-renowned Sheila Rogerson as the head writer. The initial interest for this series has been nothing short of magnificent.”

“I’m honored that Kids Can Press is kicking off their milestone anniversary with the announcement of Millie Magnificent,” said Ashley Spires. “I am so lucky to work with a publisher with such close ties to an animation studio. As a child, I dreamed of working in animation, and having published with Kids Can Press, who have a unique relationship with Nelvana, that dream became a reality — not once, but twice! Now my role as an author-illustrator has expanded to television writer and producer.”

Today, Kids Can Press also revealed the cover of the third book in The Most Magnificent franchise, releasing in the fall of 2023. The Most Magnificent Maker’s A to Z takes readers on an inspirational alphabet journey, as our favorite characters from The Most Magnificent Thing walk us through all the words that little makers need to know. The new picture book and future books in the franchise, together with Nelvana’s Millie Magnificent, are part of the companies’ strategy to expand the audience and help foster the next maker generation.

Kids Can Press is familiar with franchise cross-media success; in addition to the aforementioned Binky Adventure series spin-off, they are home to Franklin the Turtle, one of the most successful Canadian children’s book franchises, with over 65 million copies in print, including international brand licensing and Nelvana’s animated TV series that continues to air around the world.

“We will have more news, milestones, promotions and events to share throughout our anniversary year, to showcase our successful partnerships and our dedication to advancing diversity, equity and inclusion as well as the United Nations Sustainable Development Goals,” added Lyons Johnston. “Watch for highlights on some of our newest picture books, graphic novels, YA and nonfiction, and previews of other exciting projects in the pipeline. Looking ahead to what this anniversary year holds, I think Millie would say it best — ‘IT’S GOING TO BE MAGNIFICENT!’”

About Kids Can Press
Kids Can Press, part of the Corus Entertainment family, is celebrating its 50th Anniversary in 2023. A recipient of the distinguished Bologna Prize for the Best Children’s Publisher, North America, Kids Can Press is known for its acclaimed literary picture books, character-driven franchises with global and crossover appeal and award-winning STEM– and social issues–based nonfiction. The publisher’s catalog includes an active list of over 700 titles for children and young adults enjoyed by young readers around the world. Kids Can Press is among some of the industry’s leading publishers distributed by Hachette Client Services and is a proud signatory of the United Nations Publishers Compact. For more on our books and creators visit kidscanpress.com.

About Nelvana
Entertaining kids for over 50 years, Nelvana is a world-leading international producer and distributor of children’s animated and live-action content. Nelvana produces a stable of award-winning and globally renowned brands that focus on comedies, preschool and action series, and ancillary consumer products programs. Nelvana’s content airs on Corus Entertainment’s kids’ channels in Canada and in over 180 countries around the world. The Nelvana library has well over 4,800 episodes of programming and has received over 70 major international program awards including the Emmys® and Canadian Screen Awards. Visit the Nelvana website at nelvana.com.

About Ashley Spires
Ashley Spires has written and illustrated dozens of books for children and is known for her character-driven picture books and graphic novels. Most notable is the bestselling The Most Magnificent Thing, which, combined with its recent follow-up The Most Magnificent Idea, have sold close to a million copies. Her Binky Adventure graphic novels inspired the Nelvana animated series Agent Binky, seen around the world. Ashley lives in British Columbia with her dog and a growing army of felines.