Watch the Epic Two-Hour Season Finale of Big Brother Canada on Thursday, May 5 at 8 p.m. ET/PT on Global

Voting Now Open for Canada to Cast Their Jury Vote on BigBrotherCanada.ca

TORONTO, May 4, 2022 – In Wednesday’s Big Brother Canada special eviction, it was duo versus duo, with the friendly physician and Business B prevailing against their counterparts, Haleena and Kevin’s “The Ghosts”. With the finale around the corner, HOH Josh Nash held all the power after winning the most vital POV competition of the season, using the Veto to take ride-or-die Betty Yirsaw off the block against Kevin Jacobs. When Haleena Gill hit the block for the first time ever this season, sole voter Betty chose to evict her, sending her straight to jury as its seventh member. The season’s final three, Kevin, Josh and Betty, will compete for the grand prize and title as winner of Big Brother Canada Season 10 in a three-part HOH competition during Thursday night’s two-hour season finale at 8 p.m. ET/PT on Global.

“They know sitting next to Kevin, they have very high odds of winning. You always want to get that strong player out, and here I am,” said Haleena. “Otherwise I would have won this game, I would have been the winner of Season 10. But they saw me – I couldn’t be invisible for so long.”

In the most pivotal week in the BBCAN10 house, Josh survived elimination and then won the most important HOH competition of the season, solidifying his place in the finale. After agreeing to throw the HOH comp to one of his “Crash Test Dummies” alliance members for keeping him safe the week prior, Josh decided to put his game first and nominated a frazzled Kevin and five-time block star Betty for eviction. Upon realizing that “The Ghosts” invisibly ran the house all season long, Josh was determined to dismantle the haunting duo. Getting down and dirty in the final POV competition of the season, Josh escaped the sewer the fastest and won his first Veto. “The Ghosts” fought hard to keep the “Crash Test Dummies” alliance alive until the bitter end, but ultimately Josh decided taking Betty to final three was best for his game, and the two believed Kevin would be easier to beat in the long run. Josh chose to use the final Veto of Season 10 to take Betty off the block, making Haleena a nominee for the first time this season. Betty held the sole vote to evict and in the tearful POV ceremony, she sent Haleena packing from the Big Brother Canada house. 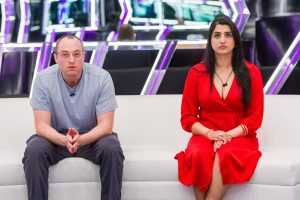