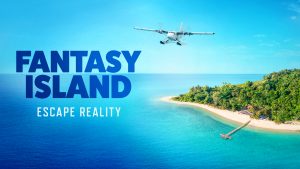 Stream Global Live and On-Demand with STACKTV, the Global TV App and GlobalTV.com

TORONTO, April 28, 2022 – Global invites viewers to escape reality with the return of last summer’s #1 new series Fantasy Island. Premiering Tuesday, May 31 at 9 p.m. ET/PT on Global, and available to stream live and on demand with STACKTV, the Global TV App and Global TV.com, Season 2 of the modern drama series takes place at a luxury resort, where any fantasy requested by guests is fulfilled, although they rarely turn out as expected. Delving into the “what if” questions that keep us awake at night, each episode tells emotional, provocative stories about people who arrive with dreams and desires and depart enlightened and transformed through the magical realism of Fantasy Island.

The reimagined classic returns with endless possibilities. In the sophomore season, the transformations continue when two former high school losers come to the island hoping to make their onetime classmates envious of their new lives. Also, three friends attempt to find out what happened to a fourth companion, who mysteriously vanished decades ago; and an empty-nester couple arrives to determine whether or not to divorce.

The modern drama series stars actress, singer and songwriter Roselyn Sanchez as Elena Roarke, a descendant of the iconic Mr. Roarke, who set aside her own ambitions, and the love of her life, to uphold her family’s legacy. Sophisticated, insightful and always charming, Elena’s calm exterior masks the challenges of the responsibilities she has assumed as steward of this mysterious island. Kiara Barnes stars as Ruby Akuda, a young woman with an old soul who arrived on Fantasy Island with a terminal illness and was given a new lease on life as Roarke’s right hand; and John Gabriel Rodriquez plays Javier, the rugged, handsome and charismatic head of transport – a pilot, mechanic and jack of all trades. While the island provides Javier refuge, as with everything else it offers, it may come at the price of a reckoning.

For talent interviews or any other media inquiries, please contact: