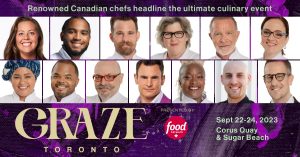 TORONTO, January 25, 2023 – Today, GRAZE TORONTO announced its festival dates and initial lineup of participating chefs. Presented by Food Network Canada, GRAZE will take place Friday, September 22 to Sunday, September 24, 2023 at Corus Quay and Sugar Beach. Hosted by television personality Noah Cappe, GRAZE will feature some of the biggest names in the Canadian food scene alongside best-in-class food and drink offerings. Festival-goers will be able to take in the brilliance of these celebrated chefs through immersive culinary experiences complimented by a wide array of activations, live music, local art, and more.

Providing the ultimate experience for lovers of extraordinary cuisine, attendees can take part in chef-led tastings, food demos, cooking classes and interactive exhibits. With pop-ups from some of the city’s most celebrated restaurants, patrons can indulge in the latest gastronomical greatness. With Lake Ontario as its backdrop, GRAZE will also offer an exceptional array of engaging experiences and premium entertainment.

Dynamic television personality Noah Cappe will act as host, leading the festivities as he keeps audiences entertained with his signature humour and charm. Cappe is a familiar face to Canadians, most recently seen as the host of Food Network Canada’s Carnival Eats, Wall of Chefs and Wall of Bakers.

Additional participating chefs, from some of the GTA’s best and most buzzed-about restaurants, will be announced at a later date.

“We’re excited to unveil GRAZE Toronto’s initial lineup of chefs who represent the crème de la crème of Canada’s food scene,” said Dervla Kelly, SVP Marketing & so.da, Corus Entertainment. “GRAZE will be a one-of-a-kind, premium food event with a high-intent audience ready to engage with the festival’s offerings and sponsors. GRAZE is offering sponsors with custom activations and opportunities with the renowned chefs, all supported by the power of Corus and its marketing megaphone.”

Sponsorships are available across six different levels of participation. To learn more, please contact your Corus Sales Representative or email at info@grazetoronto.ca. Additional details for the festival’s ticketing, activations, partnerships, and more will be shared at a later date.

GRAZE Toronto is developed by a talented team of event, festival and media experts, presented by Food Network Canada and produced by Corus in partnership with Eatertainment Events & Catering. Judy Merry, an industry veteran with over 20 years of experience planning and executing some of North America’s most successful festivals and tradeshows, serves as Executive Producer of GRAZE.