Based on the True Story of Emmett Till and Mamie Till-Mobley, Limited Series Women of the Movement Debuts Jan. 6 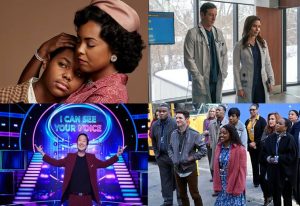 From L to R: Women of the Movement, Good Sam, I Can See Your Voice, Abbott Elementary

Global’s new winter shows and award-winning lineup of hit series are also all available to stream anytime on GlobalTV.com, the Global TV App, and STACKTV.

Global adds two new captivating dramas to its growing collection of scripted series. Currently filming in the Toronto area, procedural medical drama Good Sam premieres Wednesday, Jan. 5 at 10 p.m. ET/PT. Starring Sophia Bush (Chicago P.D.) and Jason Isaacs (Harry Potter), the series follows Dr. Samantha Griffith (Bush), the new top surgeon at Lakeshore Sentinel Hospital, a role she’s had ever since the legendary leader of the place – her father (Isaacs) – fell into a coma. But complications have set in: Having recovered, the elder doc wants to resume his duties. The result is a clash of family wills between old guard and new methods in a life-and-death business.

Next up, six-episode limited series Women of the Movement debuts Thursday, Jan. 6 at 8 p.m. ET/PT, and continues to air for three consecutive weeks.The limited series is based on the true story of Mamie Till-Mobley (Adrienne Warren), who in 1955 risked her life to find justice after her son Emmett (Cedric Joe) was brutally murdered in the Jim Crow South. Unwilling to let Emmett’s murder disappear from the headlines, Mamie chose to bear her pain on the world’s stage, emerging as an activist for justice and igniting the civil rights movement as we know it today.

Moving to Global’s unscripted content, mystery musical competition series I Can See Your Voice joins Global for a second season, kicking off with an all-new special holiday-themed episode Tuesday, Dec. 14 at 10 p.m. ET/PT, and then returns Wednesday, Jan. 5 at 8 p.m. ET/PT for the season premiere in its regular time slot. Hosted and executive-produced by Ken Jeong (The Masked Singer), each week one contestant will have the chance to win a cash prize if they can tell the difference between the good and bad singers, without ever hearing them sing a note.

Fan favourite reality series Celebrity Big Brother also returns for a third season on Wednesday, Feb. 2 at 8 p.m. ET/PT. Hosted by Julie Chen Moonves, the celebrity edition will air multiple nights each week throughout February, with the finale on Wednesday, Feb. 23. Stay tuned for the full lineup of celebrities entering the Big Brother house this season.

Rounding out Global’s new winter series is Abbott Elementary. After an early premiere in December, Global’s latest comedy is back Wednesday, Jan. 5 at 9 p.m. ET/PT, and will air Wednesdays for three consecutive weeks and then moves to Thursdays beginning Jan. 27. The workplace comedy follows a group of dedicated, passionate teachers – and a slightly tone-deaf principal – as they navigate the Philadelphia public school system.

Together with the highly-anticipated new series for 2022, Global brings back the network’s most in-demand returning shows and hit franchises. First, prolific newsmagazine broadcast 60 Minutes returns Sunday, Jan. 2 at 7 p.m. ET/PT, followed by Queen Latifah-led action-packed drama The Equalizer at 8 p.m. ET/PT. Then, catch NCIS airing Monday, Jan. 3 at 9 p.m. ET/PT followed by the second most-watched new show of the fall NCIS: Hawai’i at 10 p.m. ET/PT. On Tuesdays, the FBI franchise will keep audiences engaged throughout multiple hours of the night starting with FBI: Most Wanted returning Tuesday, Jan. 4 at 7 p.m. ET/PT, FBI at 8 p.m. ET/PT and FBI: International at 9 p.m. ET/PT.

Global will announce additional premieres in the coming months for more new shows and returning seasons including the #2 show of the fall 9-1-1, Global original reality juggernaut Big Brother Canada, and more.

AT A GLANCE: SNAPSHOT OF GLOBAL’S 2022 WINTER LINEUP – NEW PREMIERES AND SERIES RETURN DATES
All times are ET and subject to change. New series and seasons are listed in bold.