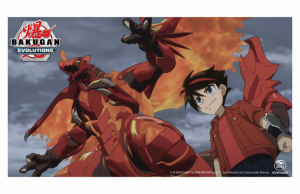 TORONTO, October, 13, 2021 – Corus Entertainment’s Nelvana, a world-leading international producer, distributor and licensor of children’s animated and live-action content, Spin Master-Corp., a leading global children’s entertainment company and creators of BAKUGAN®, and TMS Entertainment announced today the greenlight and start of production for an epic new season of BAKUGAN® titled Bakugan: Evolutions (26 x 22 mins). The fourth season of the hit anime adventure series is set to premiere in early 2022 in Canada on TELETOON and live and on demand on STACKTV through Amazon Prime Video Channels. Seasons 1 through 3 are currently available on Netflix in both Canada and U.S., and Seasons 2 and 3 are available on STACKTV in Canada.

“As the success of the Bakugan franchise continues to flourish globally, we’re excited to elevate our audiences’ experiences,” said Mellany Masterson, Head of Nelvana Enterprises. “The new world created for Bakugan: Evolutions is sure to engross audiences with bigger and better battles than ever before, and the new products from Spin Master and our licensees will further engage our fans.”

The franchise continues to make its mark as a global phenomenon with Bakugan driving the battling toy segment and over 20 licensees signed covering soft lines, home décor, publishing and more. Most recently, Nelvana has signed on new licensees in France including Sun City (apparel) and Aymax (bedlinen), both set to launch products this Christmas. Additionally, Hachette continues to add to its publishing offering with new titles releasing this fall. In Canada, Nelvana continues to build its licensing program with Scholastic (publishing), Exclusive Brands (confectionery), Franco Manufacturing (home accessories) and a soon to be announced apparel and accessories partner.

“We’re committed to deepening our fans connection to the franchise, sharing the adventures of Bakugan with audiences on a global scale through the successful series and integrated toy line,” said Jennifer Dodge, President, Spin Master Entertainment. “Together with Nelvana, we have seen the Bakugan fan base build substantially over the years, inspiring the production of new Bakugan: Evolutions content that will be more innovative, accessible and interactive than ever before.”

In Bakugan: Evolutions, fan-favourite Bakugan heroes – including Drago, Trox, Pegatrix, Hydorous, Howlkor and Pharol – return stronger, faster and better than ever! Strange occurrences begin to happen in the new action-packed season; elemental energy from Vestroia is seeping into Earth, creating strange phenomena and causing Bakugan to rage out with excess energy! It’s not all bad though, as our heroes realize the Vestroian elemental energy is also causing elemental evolutions among our Bakugan! Along with these new evolutions comes a new breed of elemental brawlers, propelling the Awesome Brawlers to adapt and in effect, take Bakugan brawling to a whole new level, unlocking even more awesome powers and evolutions! Once again, the fate of two worlds, Earth and Vestroia, rests in the hands of the Awesome Brawlers and their Bakugan partners.

Entertaining kids for over 50 years, Nelvana is a world-leading international producer and distributor of children’s animated and live-action content. Nelvana produces a stable of award-winning and globally renowned brands that focus on comedies, preschool and action series, and ancillary consumer products programs. Nelvana’s content airs on Corus Entertainment’s kids channels in Canada and in over 180 countries around the world. The Nelvana library has well over 4,800 episodes of programming and has received over 70 major international program awards including Emmys® and Canadian Screen Awards. Visit the Nelvana website at nelvana.com.

Spin Master Corp. (TSX:TOY) is a leading global children’s entertainment company creating exceptional play experiences through a diverse portfolio of innovative toys, entertainment franchises and digital games. Spin Master is best known for award-winning brands PAW Patrol®, Bakugan®, Kinetic Sand®, Air Hogs®, Hatchimals®, Rubik’s Cube® and GUND®, and is the toy licensee for other popular properties.  Spin Master Entertainment creates and produces compelling multiplatform content, stories and endearing characters through its in-house studio and partnerships with outside creators, including the preschool success PAW Patrol and nine other original shows along with multiple short-form series, which are distributed in more than 190 countries. The Company has an established digital games presence anchored by the Toca Boca® and Sago Mini® brands. With close to 2,000 employees in 28 offices globally, Spin Master distributes products in more than 100 countries. For more information visit spinmaster.com or follow on Instagram, Facebook and Twitter @spinmaster.