Watch Big Brother Canada Monday at 8 p.m. ET/PT on Global to See Who Becomes the Next Head of Household

Stream #BBCAN10 Live and On Demand with STACKTV or the Global TV App and Catch Up on Exclusive Content at BigBrotherCanada.ca 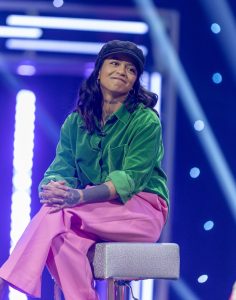 TORONTO, March 4, 2022 – Big Brother Canada’s monumental 10th season returned with new houseguests, new twists and an epic week of gameplay. Nanaimo’s Hermon Nizghi closed the door on the competition, becoming the season’s first Head of Household. Nominating contestants Melina Mansing and Jess Gowling for eviction, Jess ultimately popped their way to victory, winning the first Power of Veto competition and removed themselves from the block. Even with Kevin Jacobs nominated as the replacement nominee, artist Melina couldn’t brush enough strokes and was sent home by a vote of 11 to 2.

“At the end of the day, I’m not a people pleaser,” said Melina Mansing. “I really should have done that better, but it was very hard.”

A big call by Big Brother, answered by Toronto’s Jay Northcott, ensured their safety for the week and exemption from the first HOH competition, “Doors of Destiny,” where finalists Moose Bendago, Hermon Nizghi and Josh Nash all put their fate behind a trio of mystery doors. And behind door number three: Hermon would be named the season’s very first Head of Household, while Moose and Josh won safety from eviction behind doors number one and two. Nominees Melina and Jess both fought hard in the POV competition “Power Poppers 2.0,” a nod to the original game played in Season 1, but it was Jess who came out victorious and pulled themselves off the block. The houseguests pleaded their cases to “Hermon Enterprises,” but the smooth salesman decided to go with someone who he didn’t see as a threat, choosing sales engineer Kevin as the replacement nominee. Determined to stay in the game, Kevin engineered his campaign, offering information as currency, resulting in Melina becoming the season’s first evicted houseguest.

After the eviction, Arisa announced the first surprise of the season – that surviving the block may bring a reward. At points throughout the season, the lucky houseguest who survives the block will come on down and make a mystery door selection, receiving what’s behind it. First up, surviving nominee Kevin won a $500 cash prize.

Delivering exclusive access to the houseguests directly following their eviction every Thursday, fans can catch the interviews live on the #BBCAN TikTok account @BigBrotherCA, also available on Facebook and BigBrotherCanada.ca the next day. Then watch Global’s The Morning Show Friday morning at 9:40 a.m. ET to catch Melina’s first broadcast interview, in addition to ET Canada at 7:30 p.m. ET on Global.

Watch the drama heat up on Global, Monday at 8 p.m. ET/PT to see who becomes the next Head of Household, Wednesday at 7 p.m. ET/PT to find out who wins the Power of Veto and Thursday at 8 p.m. ET/PT for Eviction night. In addition, fans can become flies on the BBCAN wall as the free live feeds are now streaming at BigBrotherCanada.ca.