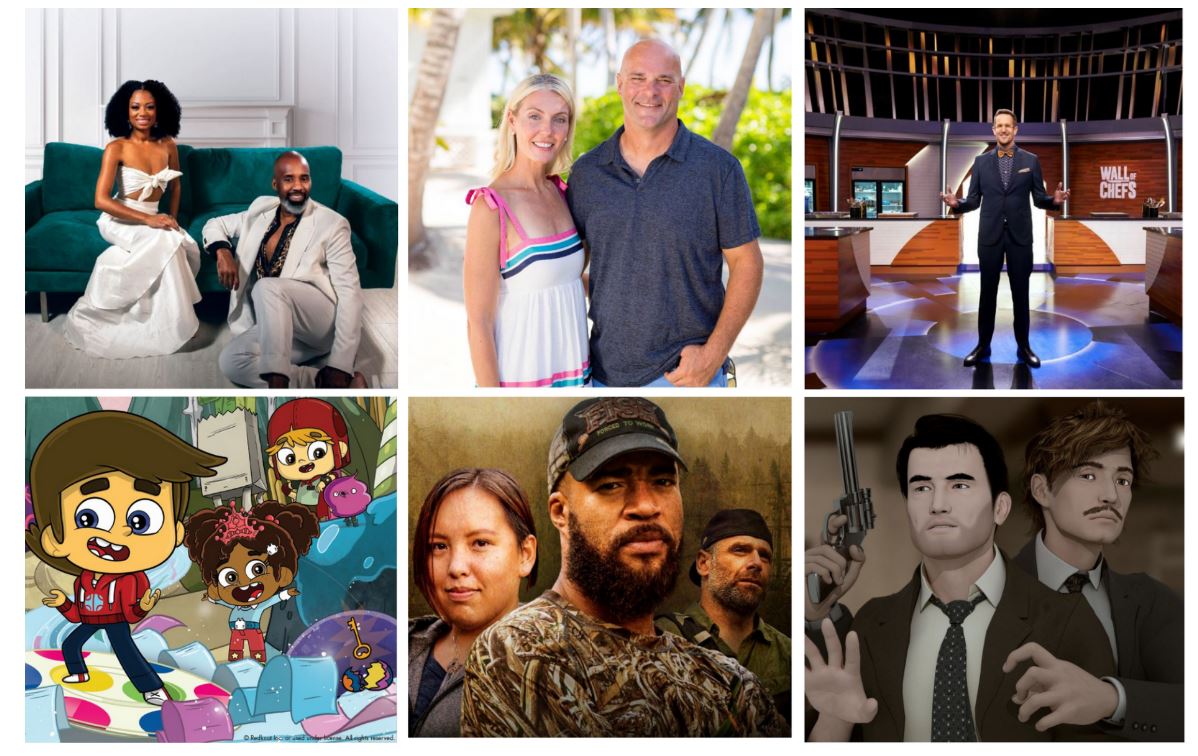 TORONTO, May 26, 2021 – Today, Corus Entertainment announced its slate of premium original content for 2021/22 with 35 impressive greenlights and renewals across its powerful portfolio of specialty networks and streaming platforms.

“Corus’ ongoing commitment to Canadian content and creators continues with this new wave of greenlights and renewals featuring a diverse mix of original lifestyle, factual, and children’s series, from Corus and its production powerhouses, Corus Studios and Nelvana,” said Colin Bohm, Executive Vice President, Content and Corporate Strategies, Corus Entertainment. “We are proud to collaborate with our esteemed production partners to advance new formats, tell engaging stories, and champion voices that inspire audiences in Canada and abroad.”

With over 500 hours of content sold this year, Corus Studios, a leading hit-maker in lifestyle and unscripted series in Canada, broadens its worldwide reach and scale with eight new series and 13 returning shows that will debut across Food Network Canada, HGTV Canada, and HISTORY®.

Celebrating 50 years as a world-leading international producer and distributor of children’s animated and live-action content, Nelvana has greenlit four brand new animated series and one returning fan-favourite with more to be announced soon. Nelvana-produced content is distributed in over 180 countries around the world with fresh new series and seasons landing in Canada on Corus’ leading kids’ networks, YTV and Treehouse, later this year.

Beyond Corus Studios and Nelvana, Corus also proudly announces its first-ever original series for Adult Swim with Psi Cops (26×11), while kid-favourite cartoon Toopy and Binoo has been greenlit to return in 2022 as an animated feature film of the same name (1×80).

Stay tuned for more Corus content announcements in the coming weeks including updates across scripted and new pickups for the 2021/22 season. For the latest updates, visit www.corusent.com.

**MEDIA NOTE** See below for a complete breakdown of today’s Corus Originals announcements including series synopses and network information.

Vibrant, fresh and fun, Styled (Working Title) (8×60), follows the staging and renovation adventures of dynamic design super-duo and BFF’s Nicole Babb and Caffery VanHorne. Then in Trading Up (10×60), Mandy Rennehan, celebrated builder, motivational speaker, blue-collar hero and proud founder and CEO of the women-owned LGBTQ+ business Freshco.ca, focuses on the trades as she mentors deserving apprentices while renovating three extraordinary properties in her hometown of Yarmouth, Nova Scotia.

HGTV Canada’s trusted coach and contractor, Sebastian Clovis, returns to the network in Gut Job (8×60) with his biggest mission to date – guiding homeowners through the biggest renovations of their lives. In a new spin-off, Scott McGillivray turns the tables and puts his rules to the test on his waterfront cottage in Scott’s Own Vacation House Rules (4×60). The stunt-series will debut alongside with the renewal of his Top 5* HGTV Canada Original series, Scott’s Vacation House Rules, Season 3 (12×60) set to debut in 2022.

The show that keeps on breaking records, Island of Bryan is back for a fourth season. HGTV Canada’s most-watched series in a decade continues to drive audiences beating its own records season after season, and currently primed to be the #1 specialty program this spring as Season 3 continues its run. Season 4 will play out in two parts in F22 (8×60) and F23 (8×60) with the Baeumler family continuing their tumultuous journey in Bahamas as they build and run their resort, plus add-on a whole new property in Florida to renovate.

This fall, the network sees the return of gorgeous transformations in Making it Home with Kortney & Kenny (10×60). Kortney Wilson brings her extensive flipping and real estate expertise to help desperate homeowners renovate their spaces. With keys and budget in hand, she and contractor Kenny Brain (Big Brother Canada), will transform each unloved house into a show-stopper. The #1 new Canadian show on specialty this spring, Rock Solid Builds (10×60) returns for a second season with the charming Randy Spracklin and his dedicated fun-loving team, as they take on historic renos and jaw-dropping builds in the heart of Newfoundland. Breathing new life into spectacular vintage spaces, siblings Carolyn and Billy come back for another season of Farmhouse Facelift (8×60). Canadian original series with fan-favourite brothers Drew and Jonathan Scott return, transforming houses into lifetime treasures in Property Brothers: Forever Home, Season 2 (17×60).

‘The Wall’ has spoken! The exhilarating competition series, Wall of Chefs (10×60), hosted by Noah Cappe, that sees home cooks face off in front of a group of 12 intimidating and well-respected Canadian chefs, returns for a second season. Continuing the competition fever, Corus Studios introduces a deliciously divine spin-off of the series with Wall of Bakers (10×60). A fresh batch of baking series continue with the renewal of Top 10 program on Food Network Canada last spring, Great Chocolate Showdown (8×60), new episodes of The Big Bake (11×60) continue with spectacular, over-sized Halloween and Holiday-themed cakes, and Project Bakeover (10×60), the series that keeps on giving, as renowned pastry chef and entrepreneur Steve Hodge, alongside designer Tiffany Pratt, transforms struggling bakeries across North America into successful businesses.

HISTORY, the #2 specialty entertainment network this spring, sees four invigorating new and returning Corus Studios Originals added to its schedule. Attracting a massive fan-base for its unique approach to restoration, Rust Valley Restorers (6×60), a Top 10 program amongst Men 25-54, comes back for a fourth season. Previously announced, the logging and sawmill team out of Vancouver Island dig in with more high-stake jobs in Big Timber (8×60). New to the schedule is Lost Cars (Working Title) (6×60), where an Ambitious team of classic car hunters scour the remote North to recover rare classics fabled to be hiding in the wilderness, before the cars are lost forever to history. Then in Deadman’s Curse (Working Title) (8×60), former MMA fighter Kru Pitt, and young Indigenous explorer Taylor Starr seek out the help of seasoned treasure hunter and mountaineer, Adam Palmer, to finally solve the mystery of Slumach’s lost gold mine. Hidden somewhere in the rugged terrain of the Pacific Northwest, its mysterious location has eluded prospectors for generations — and many have lost their lives searching for it. The treasure hunting threesome may have ancestral connections to the legend and the gold, but extreme weather, unforgiving terrain and a curse all stand in their way.

The network brings Canadian Black History to the forefront with two Canadian originals. This November, Black Liberators WWII (1×90) will shed light on the heroic stories and amazing acts of bravery of Black Canadian soldiers during World War II, who risked their lives for their country while facing racism at home and on the battlefield. Then in a four part series, BLK: An Origin Story (4×60) explores untold stories of Black Canadians, from the early settlers of Ontario to the gold rush era of BC; from the Maroons of Nova Scotia to Montreal’s vibrant Little Burgundy neighbourhood. The series aims to show that Black History is Canadian History.

For full descriptions of new and returning series on HISTORY, please click here.

Hot on the heels of Adult Swim’s second anniversary, Corus has commissioned and greenlit its first original for the popular network. The animated Psi Cops (26×11) sees “out of the box thinkers” Agent Kyd and Agent Felix investigate spiritual phenomena, extraterrestrial life, and paranormal activity.

For a full description of Psi Cops on Adult Swim, please click here.

YTV is the place to be for non-stop Fam Fun, delivering another year of The Zone, The Zone Weekend and Big Fun Movies with beloved hosts Spencer, Tyra, Alex and Duhin. Plus, Spencer and Tyra are back for Season 2 of Kid Food Nation: The Show (8×11), where they embark on culinary missions with Canadian kid food nation heroes and answer questions like, “should I eat crickets?” or “are dandelions edible?.”

Nelvana continues to foster its partnerships with the best in kids entertainment, with the recently announced Best & Bester (52×11), a co-production between Nelvana, Eye Present and Gigglebug Entertainment, about two siblings and best friends obsessed with comparing the best things of all time while enjoying the power to transform themselves into anything they want, once a day – if only they can figure out what the best thing to be actually is!

ZJ Sparkleton (Working Title) (26×22) is an original creator-driven 2D-animated series produced by Nelvana in partnership with Nickelodeon that follows quirky 10-year-old vlogger Ruby and her tail-zapping space alien best friend as they film their daily mishaps and adventures around town.

Audiences will discover the magic of birthdays through the fantastical adventures in Super Wish (52×11), produced by Nelvana and Discovery’s joint venture, redknot, and created by Nelvana’s own Vanessa Esteves and Daytime Emmy® Award winning art director, Adrian Thatcher.

For full descriptions of new and returning series on YTV, please click here.

A new addition to Treehouse, the #1 overall kids specialty network**, is The Hamster Show (Working Title) (26×22) produced by Nelvana in partnership with Nickelodeon, where a crew of furry friends keep an eye on their owner, “King” Harry, saving him from daily doom, granting his wishes and keeping his life running smoothly. The pet-ventures continue as everyone’s favourite P.U.R.S.T. agents get ready for action in the second season of Agent Binky: Pets of the Universe (52×11), produced by Nelvana and Discovery’s joint venture, redknot, and based on the best-selling books by Ashley Spires, published by Corus Entertainment’s Kids Can Press.

Coming 2022 is the animated feature film Toopy and Binoo (1×80), based on the series of the same name that aired on Treehouse in the early aughts. Following the theatrical release, the movie will have its broadcast premiere on Treehouse.

For full descriptions of new and returning series on Treehouse, please click here.