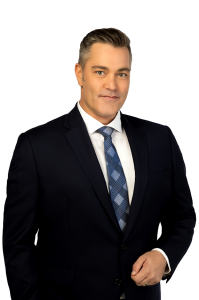 Following the announcement of beloved news anchor Gord Steinke’s retirement the station embarked on an extensive Canada-wide search for someone who reflects the values that matter most to Edmontonians. The station found its successful candidate in Scott who embodies everything Global Edmonton was looking for.

“After sharing the anchor desk with Carole Anne for over a decade and so many amazing newscasts and road shows in the community, I’m honoured to pass the torch on to Scott Roberts,” says Global News anchor Gord Steinke. “I wish Scott and Carole Anne much success and hope they have as many rewarding experiences bringing news and information to our loyal viewers as I did for over my 30-year career at Global Edmonton.”

A multiple award-winning investigative journalist, Scott has received several prestigious Edward R. Murrow Awards and RTDNA Awards. He is also the recipient of a Jack Webster Award. Born in Ontario, he is an honours graduate of Toronto Metropolitan University (formerly Ryerson University) and began his career as a print journalist at the Toronto Star and then The Globe and Mail. He launched his TV career in Edmonton where he worked as a weekend news anchor and reporter with CTV for five years. He was most recently co-anchor of CTV News at Six in Vancouver.

“We are so lucky to have a seasoned, award-winning journalist joining our team,” says Global News at 5 anchor and Global News Hour at 6 co-anchor Carole Anne Devaney. “Scott is professional, friendly and engaging. He knows and loves Edmonton and is excited to be back here. He will be a great asset to our newsroom.”

“I’m incredibly excited to be back in Edmonton,” says Global News Hour at 6 co-anchor Scott Roberts. “I started my television career in Alberta and it’s a privilege to be able to come back and tell the stories of this province and this city again. No one does local news better than Global Edmonton and I can’t wait to get to work with Carole Anne and the entire team.”

The new team of Scott Roberts and Carole Anne Devaney, who has been at the anchor desk for over ten years, speaks to Global News’ commitment to local news and the importance the station places on community connection.