Watch Big Brother Canada Monday at 7 p.m. ET/PT on Global to See Who Becomes The Next Head of Household 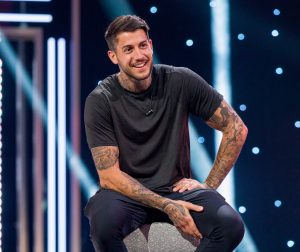 TORONTO, April 22, 2022 – For the fourth time in Big Brother Canada history, a Triple Eviction rocked the house, causing complete chaos and an un-bear-able predicament. After Laval’s Gino Giannopoulos found himself in a sticky situation, he was evicted from the BBCAN10 house. Joining him immediately after were New Brunswick’s Marty Frenette and Toronto’s Summer Sayles, after being nominated by first-time HOH Josh Nash.

Earlier in the week, Marty conquered “Mount HOH,” winning his third Head of Household, to the rest of the house’s dismay. He put up three-time nominees Betty Yirsaw and Josh with the hopes of finally evicting his archrival, Betty. But she shocked everyone when she won her first comp of the season, pulling herself off the block and ultimately disrupting the HOH’s plan. Since Marty’s backup nom, Summer Sayles, received safety with Canada’s belairdirect Eviction Protection Insurance vote earlier in the week, the Acadian had limited replacement options. Having an alliance with all four remaining eligible houseguests, Marty did the unthinkable: left the replacement nominee up to chance. In an unprecedented move never before seen on the show, Marty made Kevin, Jacey-Lynne, Haleena and Gino draw gummy bears. And with the sole red gummy bear in hand, Gino was offered up on a silver platter as the replacement nom. The firefighter’s game was extinguished by a vote of 4 to 1.

“What I wanted to do was show those five that I trusted them and I was with them all the way, so when I walked in the room I kind of got blindsided,” said Gino. “[Marty] kind of showed it to me and I’m like do I really want to put it in? But I’m like, you know what, put it in, I got to show everyone I’m in it, and look where I am.”

Immediately following Gino’s eviction, Arisa informed the houseguests of the night’s Triple Eviction. Showcasing his impressive memory in the “Challenged Time Machine” competition, Josh earned his first HOH title of the season. He then had to make a swift decision and named three houseguests for eviction. Nominating Marty, Jacey-Lynne and Summer, everyone fought hard in the “Complete the Clock” POV comp, hoping to secure their safety on this pivotal night. But it was Jacey-Lynne who clocked in the win, earning the crucial POV and pulling herself off the block. Josh shockingly named his bestie Betty as the replacement nominee and the houseguests then had to decide which of the three houseguests they wanted to keep in the game. By a unanimous vote, Betty was saved, making Marty and Summer the fourth and fifth jury members of Big Brother Canada Season 10.

“I feel betrayed, it does not make any sense,” said Summer. “All I know is the Lord has a million dollar plan out in store for me, so it’s all good. Thank you, Joshua!”

“Honestly I was really surprised,” said Marty. “I really thought that Kevin was going to vote our way. They made a great game move, they’re great players. I applaud it as a fan.”

New this season, Wendy’s® is also the proud sponsor of “After the Eviction Interview” – an extension to host Arisa Cox’s in-show interviews. Delivering exclusive access to the houseguests directly following their eviction every Thursday, fans can catch the interviews live on the #BBCAN TikTok account @BigBrotherCA, also available on Facebook and BigBrotherCanada.ca the next day. Then watch Global’s The Morning Show Friday morning at 9:30 a.m. ET to catch Gino Giannopoulos, Marty Frenette and Summer Sayles’ first broadcast interview, in addition to ET Canada at 7:30 p.m. ET on Global.