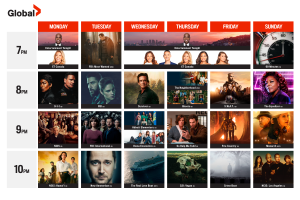 These new series join Global’s established offering of top-rated hits including the return of Canada’s #1 drama 9-1-1 (Sept. 19), #1 series Survivor (Sept. 21), last fall’s #1 new show CSI: Vegas (Sept. 29) and #1 new comedy Ghosts (Sept. 29)**. Global’s winning lineup of series are also available to stream anytime on GlobalTV.com, the Global TV App and live and on-demand with STACKTV. New this fall on STACKTV, Corus is expanding the current in-season stacking rights to some of Global’s biggest series, offering more seasons for viewers to binge, including recent back seasons of hit shows CSI: Vegas, Ghosts, The Neighborhood and the FBI and NCIS franchises which will all be available for viewers to catch up on ahead of new seasons launching on Global this fall.

“Global has been building momentum in our schedule for several years. Last fall, we celebrated being Canada’s #1 network in core primetime and this year promises to be no different,” said Troy Reeb, Executive Vice President, Broadcast Networks, Corus Entertainment. “This fall we’ve acquired some of the most sought-after new series with the biggest stars, joining an already winning lineup where audiences will find a schedule designed to entertain everyone in their household. All of this premium content is available on Global and across our ever-expanding streaming services like STACKTV, delivering viewers more seasons of TV’s biggest series.”

COMEDY
Laughs are plentiful on Global this fall starting with the previously announced addition of the Topher Grace-led comedy Home Economics, which premieres Wednesday, Sept. 21 at 10:30 p.m. ET/PT and takes a look at the heartwarming yet super uncomfortable and sometimes frustrating relationship between three adult siblings. Then from star and creator Quinta Brunson, the critical darling and seven-time Emmy®-nominated Abbott Elementary returns to Global with a full second season order premiering Wednesday, Sept. 21 at 10 p.m. ET/PT. Also, The Neighborhood starring Cedric the Entertainer returns on Thursday, Sept. 22 at 8 p.m. ET/PT. To round out Global’s stellar comedic offering, last fall’s #1 new comedy Ghosts returns Thursday, Sept. 29 at 8:30 p.m. ET/PT.**

COMPETITION REALITY SERIES
Groundbreaking reality series and Canada’s #1 show Survivor is back for a mind-blowing 43rd season, premiering with a special two-hour episode Wednesday, Sept. 21 at 8 p.m. ET/PT.** Then, love is in the air on Global this fall with previously announced new reality romance adventure The Real Love Boat, which sets sail Wednesday, Oct. 5 at 10 p.m. ET/PT. Hosted by Rebecca Romijn and Jerry O’Connell and inspired by the classic hit scripted series The Love Boat, singles are brought together to travel the Mediterranean on a luxury cruise ship while looking for love. Destination dates, challenges and surprise singles will test the couples’ compatibility and chemistry as they navigate the romantic (and sometimes turbulent) waters ahead.