Beginning September 12, the Fan-Favourite Drama Will Move from Global to W Network and Will Continue to be Available to Stream Live and On Demand with STACKTV and on the Global TV App 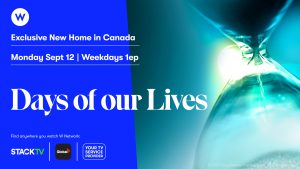 TORONTO, September 2, 2022 – Corus Entertainment announced today that, starting Monday, September 12, Top 10 specialty channel* W Network will become the new exclusive home to the Emmy® Award-winning daytime drama, Days of our Lives. Following the last airing of Days of our Lives on Global on Friday, September 9, the series will move to W Network, airing weekdays at 1 p.m. ET/PT. The series will remain available to stream live and on demand with STACKTV and on the Global TV App through a subscription to W Network via a TV provider.

“With NBC Universal’s recent decision to move Days of our Lives from NBC to Peacock in the U.S., we had to reevaluate where the series aired on our networks and felt W Network, as the destination that embraces unique, exceptional and meaningful storytelling, was the right home for this beloved series,” said Daniel Eves, Senior Vice President, Broadcast Networks, Corus Entertainment. “This move presents us with a unique opportunity to deliver the series to new audiences as we head into a new season full of shocking twists, romantic relationships, and endless drama.”

Days of our Lives, a consistent favourite among fans and critics alike, aired its 14,000th episode in 2020 and remains NBC’s longest-running series. The show has garnered 58 Emmy Awards, including most recently 2018’s Outstanding Daytime Drama, and 372 nominations, as well as multiple People’s Choice Awards, GLAAD Media Awards, and Prism Awards. The show’s success stems from its consistent commitment to excellence in writing and storytelling – supported by a diverse ensemble of performers – and an uncanny knack for anticipating viewer interests. With its mix of classic genre traditions and groundbreaking narratives reflecting modern life, Days of Our Lives remains a perennial favorite among viewers of all ages. Days of our Lives is produced by Corday Productions Inc. in association with Sony Pictures Television.

Days of our Lives will be joining W’s incredible lineup including Hallmark movies and series, Peacock exclusives like Vampire Academy, Pitch Perfect: Bumper in Berlin, and Days of our Lives: Beyond Salem, and hit premium dramas like The Good Fight, Outlander and Nancy Drew.