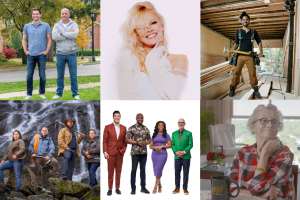 Additional photography and complete series synopsis can be found here

TORONTO, June 2, 2022 – Today, Corus Entertainment announces its complete lineup of premium original content for 2022/2023 with an incredible 45 total greenlights and renewals, including more than 600 episodes and 24 titles from Corus Studios.

“Corus is proud to showcase a standout lineup of Canadian Original content featuring dynamic formats, charismatic personalities, and renewals of fan-favourite series with homegrown talent from Corus Studios, Nelvana, and our valued production partners,” said Colin Bohm, Executive Vice President, Content and Corporate Strategies, Corus Entertainment. “Our expanding portfolio of original shows is driving significant growth in the key pillars of lifestyle, factual, kids and scripted series, as we remain dedicated to creating premium content with diverse, engaging narratives and uniquely Canadian voices appealing to audiences across the country and on an international scale.”

This year, Global welcomes back Departure and Family Law – two sophomore hits to its acclaimed slate of original scripted series. In addition, casting is underway and production is set to commence on the exciting new action drama Robyn Hood. On the unscripted side, Global remains home to the best in award-winning entertainment news coverage with ET Canada.

With content sold to more than 150 countries around the globe, Corus Studios continues to be a leader in original Canadian lifestyle and unscripted series, extending its catalogue with six new series and 16 returning shows across Food Network Canada, HGTV Canada and The HISTORY® Channel, plus a new feature-length documentary that will debut on W Network.

Celebrating its 50-year milestone, Nelvana maintains its position as a world-renowned international producer and distributor of children’s animated and live action content, with content seen in over 180 countries around the world. This year is no exception, with new series, seasons and episodes coming soon to Corus’ leading kids’ networks, YTV, Treehouse and TELETOON.

Stay tuned for more Corus content announcements in the coming weeks including updates across scripted and new pickups for the 2022/23 season. For the latest updates, visit www.corusent.com.

**MEDIA NOTE** See below for a complete breakdown of today’s Corus Originals announcements including series synopses and network information.

For full descriptions of new and returning original series across all networks please click here.

Additionally, ET Canada is back on Global for Season 18, fresh from winning four Canadian Screen Awards including Best Talk Program or Series. In addition, ET Canada Weekend has been renewed for Season 2 bringing audiences all the latest entertainment news headlines of the week.

A Top 10 specialty network** and the ultimate culinary destination, Food Network Canada satisfies appetites with the renewal of five standout original series as part of its lineup.

Food Network Canada’s new greenlights include the most prestigious culinary competition series in the country and a Top 20 overall specialty entertainment program in spring ‘21*** Top Chef Canada, which is making its return for a milestone 10th season. In the serialized series, a new roster of talented professional chefs will compete in high-octane challenges for the sought-after title of Canada’s Top Chef. The competitions continue with Season 3 of the larger-than-life themed baking series The Big Bake (7×60 Halloween and 7×60 holiday-theme) from Corus Studios. Celebrated YouTube personality and cookbook author Danni Rose joins the panel of resident judges alongside host Brad Smith, chef and author Eddie Jackson and acclaimed pastry chef Ron Ben-Israel. A Top 10 program on Food Network Canada this spring****, Corus Studios’ Great Chocolate Showdown (8×60) returns with more delectable ooey-gooey creations in its fourth season.

The HISTORY Channel comes to life this year with more new original content than ever before. The network’s slate is set to offer a slew of factual and unscripted content including the renewal of five Corus Studios hit series and two groundbreaking documentaries that are sure to educate and entertain audiences.

In honour of Canada’s National Day of Truth and Reconciliation, a new two-hour documentary sheds light on the history of the relationship between Indigenous people and settlers. True Story (2×60) offers a critical lens to the past, revealing some shameful and heartbreaking truths, as well as uplifting and inspiring hope.

For Remembrance Day, Our War (2×60) uncovers stories about extraordinary individuals who made heroic contributions to WWI and WWII. From the descendent of one of Canada’s first Black servicemen, to the great-grand-nephew of a female intelligence officer stationed at Bletchley Park, the documentary follows these descendant’s investigations into their families’ historic pasts.

New from Corus Studios this fall is previously announced series Deadman’s Curse (8×60), following a diverse team of explorers on a quest to find a legendary cursed gold mine in B.C. Fan-favourite Corus Studios series Backroad Truckers (Season 2, 8×60), Big Timber (Season 3, 8×60), Lost Car Rescue (Season 2, 6×60), and Rust Valley Restorers (Season 5, 8×60) all return this year, along with Salvage Kings (Season 3, 8×60), which sees Ted taking the ultimate risk of opening his own salvage business with a team of familiar and new faces.

HGTV Canada is the nation’s destination for all things home. With 12 Corus Studios series upcoming, including seven returning favourites, HGTV Canada continues to be the go-to network for inspiring and heart-warming programming that fits any style.

The #1 Canadian Specialty series*****, Island of Bryan (8×60) continues with new episodes this fall, with even more Baeumler adventures upcoming. Corus is prepping a new Untitled Baeumler Project (working title) (10×60) in development and slated for 2023, plus Bryan will also team up with co-host Scott McGillivray in the new previously announced competition series Renovation Resort (7×60). The frenemies oversee four talented contractor/design duos as they each transform a waterfront cabin into a one-of-a-kind vacation rental for a chance to win a $100,000 prize. Viewers will see Scott reunited with Debra Salmoni in Season 4 Scott’s Vacation House Rules (14×60), which is newly greenlit.

Sarah Richardson takes on her own vacation rental challenge this fall in the previously announced Sarah’s Mountain Escape (10×60). The series follows Sarah and her husband, Alexander Younger, as they transform a run-down B&B in Whistler, B.C. into a four-season luxury vacation rental property. Another West coast-based design and renovation series is Pamela Anderson in Pamela’s Garden of Eden (8×60). The previously announced series, coming this fall, follows Pamela as she revitalizes her grandmother’s six-acre legacy property on Vancouver Island into a stunning retreat. Another new personality to the network is no-nonsense luxury home designer Ali Budd, who leads a creative team to renovate and build incredible million-dollar renovations in Ali Budd (working title) (8×60).

Off the heels of their series premieres, Sebastian Clovis will offer more empathy and experience to overwhelmed homeowners in Season 2 of Gut Job (8×60), while the cross-Canada renovators from Hoarder House Flippers (8×60) will return to tackle a new batch of disaster houses in a brand new season. Renewals continue with a new season of Top 20 Specialty series Rock Solid Builds (8×60)*****, as well as fellow Corus Studios series’ Farmhouse Facelift (8×60) and Making it Home with Kortney and Kenny (10×60). New episodes of Property Brothers: Forever Home (20×60) staring HGTV Canada’s beloved brothers are also confirmed.

W Network spotlights the prolific career of sex educator Sue Johanson in Sex with Sue (1×90), directed by Lisa Rideout. Viewers will be reintroduced to the former W Network personality and see the unexpected and exciting ways her legacy lives on today.

Corus Studios dives deeper into scripted content with the previously announced set of romantic movies The Love Club (4x120min). The movies follow four women, each dealing with their own dating debacle, who take a vow to call on one another if they are ever in romantic trouble again – a vow that has them resurrecting their “Love Club” ten years later as each of them search for their unique happily-ever-after. The first movie is set to premiere on W Network Winter 2023. The movies will be distributed through Corus Studios.

Corus is pleased to announce its second Canadian original series for Adult Swim, the popular network that offers an unexpected blend of authenticity, originality, and cleverness. The animated Red Ketchup (20×30), commissioned and greenlit by Corus’ French channel Télétoon la nuit, is based on the cult Quebec comic book series from the ‘80s of the same name. Featuring FBI’s crazed rogue agent, Steve “Red” Ketchup, the series will premiere in Canada on both Télétoon la nuit and in English on Adult Swim in 2023. Plus, the previously announced first Canadian original series for Adult Swim, Psi Cops (24×11), is set to premiere on Adult Swim Winter 2023. “Top” detectives Agent Kydd and Agent Felixx, of the secret agency Psi Cops, investigate spiritual phenomena, extraterrestrial life, and paranormal activity using their overly competent incompetence.

Nelvana continues to deliver premium entertainment for kids with compelling storylines and characters, by nurturing creator-driven projects and best-in-class partnerships.

The previously announced Best & Bester (52×11) is set to premiere this fall on YTV. A co-production between Nelvana, Eye Present and Gigglebug Entertainment, the series follows two siblings and best friends obsessed with comparing the best things of all time while enjoying the power to transform themselves into anything they want, once a day – if only they can figure out what the best thing to be actually is!

More fresh content from Nelvana landing on Corus’ kids networks this fall includes new episodes of Super Wish (52×11) on YTV, produced by Nelvana and Discovery’s joint venture, redknot, and created by Nelvana’s own Vanessa Esteves and Daytime Emmy® Award winning art director, Adrian Thatcher. Plus, new episodes of Bakugan: Evolutions (26×22) will bring epic action to TELETOON. Then, everyone’s favourite P.U.R.S.T. agents continue the adventure with new episodes of the second season of Agent Binky: Pets of the Universe (52×11). Produced by redknot, the series is based on the best-selling books by Ashley Spires, published by Corus Entertainment’s Kids Can Press. Also returning to the network is a new season of Thomas & Friends: All Engines Go! (52×11), accompanied by a brand new special with the beloved engines Thomas & Friends: All Engines Go! Mystery at Lookout Mountain (1×60).

YTV is the place to be for non-stop Fam Fun! Reaching more kids in its afterschool time block than any other kids station****** The Zone is delivering another year of cool contests, celeb interviews, games and sketches alongside The Zone Weekend and Big Fun Movies. Beloved hosts Spencer, Alex and Duhin return, plus new host Melony will make her on-air debut on June 6 on The Zone.

Premiering on YTV in 2023, Popularity Papers (26×30) is the first scripted series to be announced since Corus became a majority stakeholder in the Academy Award® and Emmy Award®-nominated production company Aircraft Pictures. From Aircraft Pictures and WexWorks Media, the live-action comedy series, developed for television by Amanda Brooke Perrin and showrunner Vivian Lin, is based on the award-winning middle-grade book series by Amy Ignatow. The series tells the story of two best friends, Lydia Goldblatt and Julie Graham-Chang, who are on a mission to crack the popularity code and dismantle this crazy social construct for middle-schoolers everywhere. Using the scientific method, the girls conduct social experiments on their peers with hilarious results.

About Corus Studios
Established in 2015, Corus Studios, a division of Corus Entertainment, is a premium content studio that develops, produces and distributes a wide array of original lifestyle, unscripted and factual content globally. Offering dynamic programming that entertains, informs and drives audiences across platforms, Corus Studios content is featured across Corus’ suite of channels, including HGTV Canada, The HISTORY® Channel, Food Network Canada, and SLICE™. To date, Corus Studios content has been sold in over 150 territories worldwide.